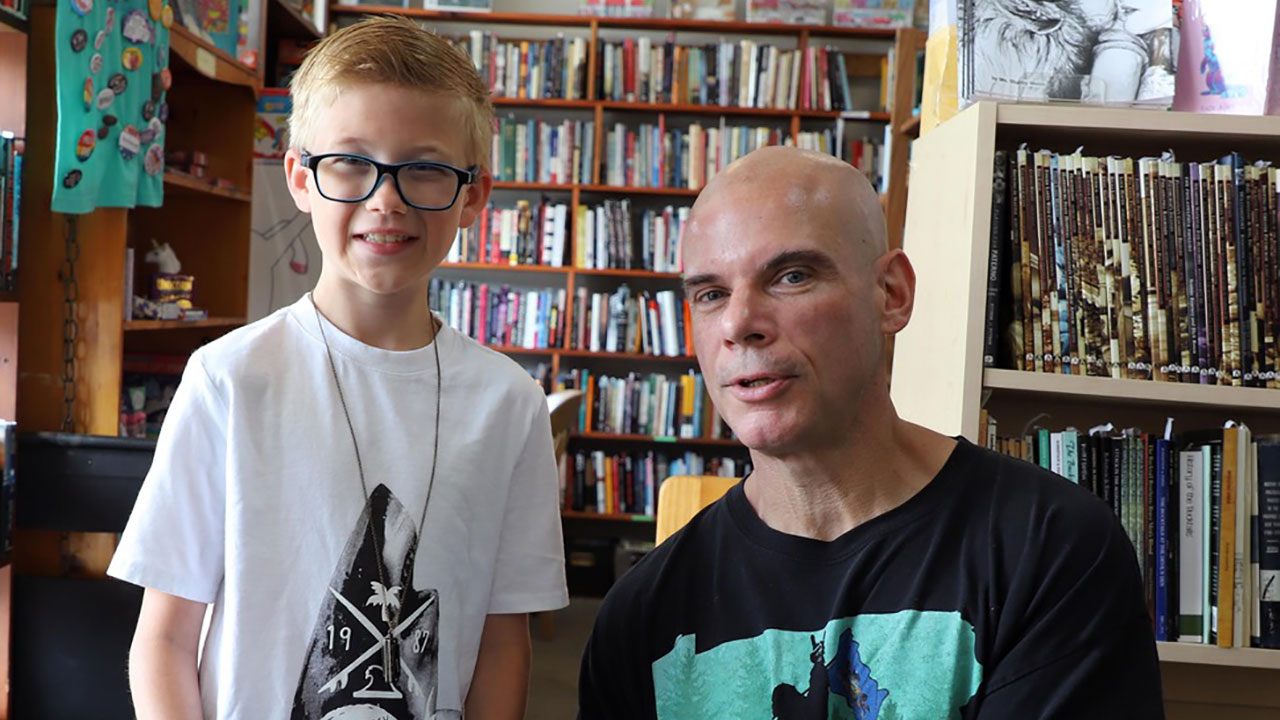 Wellsboro Author and Williamsport Youngster Help Each Other

Photo by John Eaton
McKay Campbell and Kevin Coolidge hold the five books in the Totally Ninja Raccoon series that McKay’s mom bought for him on Friday, July 1 at From My Shelf Books in Wellsboro. Now, McKay has them all.

10-year-old McKay Campbell of Williamsport and Kevin Coolidge of Wellsboro have had a big impact on each other’s lives.

McKay has dyslexia, a learning disorder, and was not able to read a book on his own.

Kevin could not finish the first draft of his 10th ninja raccoon book because he has been struggling with writer’s block for three years, since 2019.

Between December of 2015 and November of 2018, Coolidge had written nine books in his “Totally Ninja Raccoons” series for 7- to 10-year-old reluctant readers about three raccoon brothers who become ninjas. Eight are full of action, adventure and a creature (Bigfoot, Werewolf, Sidehill Gouger, Thunderbird, Krampus, Loch Ness Monster, Alien and Jersey Devil). The ninth is “The Totally Ninja Raccoon Joke Book.”

McKay and his sister, Lynnae, 12, were staying with their grandmother, Lesia Weeks of Wellsboro. On Friday, June 17, she stopped at Coolidge’s booth during the Laurel Festival to buy her grandson two ninja raccoon books. Things quickly changed for McKay and Kevin after they talked and became friends.

“We talked about the ninja raccoons and the monsters and how I write about what interested me at his age,” Coolidge said.

“We both like Bigfoot and Chinese food,” said McKay. “I like all the monsters in his books.”

Through his school, McKay has learned how to use BookShare, online audio eBooks that underline the words as they are read to users with dyslexia and this summer is being tutored in reading three days a week.

“He had been doing a lot of reading, but not on his own,” said Kelly Campbell, McKay’s mom.

“Everything seemed to come together at the same time for my son,” Kelly said.

McKay came home from Wellsboro Saturday night, June 18, determined to read all of the books in Coolidge’s “Totally Ninja Raccoons” series himself. He read his very first chapter that night and during the week brought the book with him and read it out loud to his mother as she drove him to swim practices and meets. “It’s become our thing,” Kelly said.

On June 24, McKay finished Coolidge’s book and emailed Kevin to tell him.

“When I received the email from McKay saying he had just read ‘The Totally Ninja Raccoons and the Weird & Wacky Werewolf’ and that it was the first book he had ever read on his own, I had a great feeling of accomplishment,” said Coolidge.

“Writers don’t often get to know about the impact their work has. McKay’s email inspired me to work through my writer’s block. I finished the crucial first draft of ‘The Totally Ninja Raccoons Discover the Lost World’ Monday afternoon, July 4. It will take two months to prepare it for publication this September,” he said.

“McKay is reading a book a week,” said Kelly. “Because Kevin writes for reluctant readers, his chapters are shorter and easier to read. That allows my son to finish faster, which gives him a sense of accomplishment and encourages him to continue reading.

“I consider Kevin’s ninja raccoon reluctant reader books a gateway for kids who want to read on their own, like my son.”

McKay also wanted the students at his school, Curtin Intermediate to be able to read the ninja raccoon books in the library. “We talked about how he could make that happen. At the end of June, we opened a GoFundMe page online and within hours had reached McKay’s goal of $250,” Kelly said. “Now we are at $400 and are leaving his page up until the end of July.”

McKay’s goal has changed. He wants to provide the nine “Totally Ninja Raccoons” books to each library at the Williamsport Area School District’s two intermediate schools (4 to 6 graders) and three primary schools (K to 3 graders), to the James V. Brown Public Library and others.