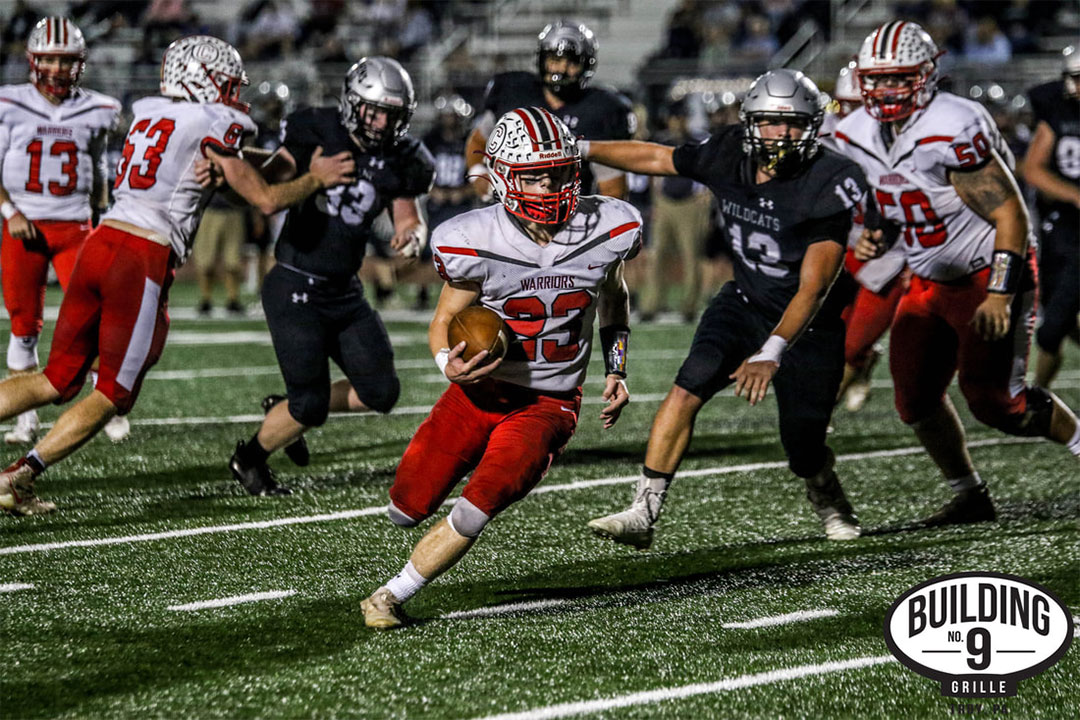 After a late schedule change, the Canton Warriors traveled to face Union Area and came away with a 31-18 win to open the season.

Head Coach Tyler Sechrist was happy to get a game and some quality competition.

“I think this was a really good test for us. They are a solid team. We didn’t play to our potential but week one is when you want to get all of those bugs out,” said Sechrist.

The Warriors got contributions from their key players such as Riley Parker and Wes Bellows.

Parked looked to be in mid season form in the first half with 50 rushing yards and two touchdowns to finish the game.

“We grinded out this win. It wasn’t our best but we did what we need to do and plan to work harder from here,” said Parker.

Parker knows that one of the keys to the Warriors success down the stretch, will be minding the simple things and cleaning up some of the things that he knows they can do better.

“If we can out-condition these teams, we will be able to take control early on.”

Wes Bellows dealt with some defensive miscues but made up for it with an interception that all but sealed the win for Canton. Bellows is focused on cleaning things up next week and remaining focused on the task at hand.

Canton opened up the scoring with a Hayden Ward rushing touchdown in the first.

Union Area would then answer with a 37 yard connection to Elijah Booker from Braylon Thomas. Union would go for two but the conversion failed making it 7-6.

The Warriors used the ground game again on a Hudson Ward five yard rushing touchdown. The kick failed as the Warriors then took a 13-7 lead.

Canton looked to be pulling away as Parker rumbled to the end zone on a 35 yard scamper to push the Warriors lead to 19-7 as the extra point attempt was no good.

Union would use their air attack again as Thomas connected with Dayne Johnke on a 28 yard pass play for the score. Union would go for the two-point conversion and fail making it 19-12.

It was the leg of Ferguson that would bolster the Warriors lead on a 33 yard field goal to push the Warrior lead to 22-12.

Union was not done. A long drive that chewed up lots of clock resulted in a Kaden Fisher one yard run to cut into the Warrior lead making it 22-18.

The Warriors special teams would help the cause forcing Thomas to run out of the end zone on a punt resulting in a safety and adding to the Warrior lead 24-18.

Parker would close out the game with a 20 yard scamper for a score and make it a 31-18 final and clinch the week 1 win for Canton.

Despite the win, Coach Sechrist knows his team will need to clean up some things heading into week 2.

“We need to be in better shape. I know its hot right now but it needs to happen, we need to protect the ball better, we need to keep getting better. I’m proud of the way they fought. They played hard all night there’s just still some things we need to keep working on,” said Sechrist.

Canton will be on a short week as they get ready to head to Island Park in Blossburg Thursday night to face a North Penn team that will be hungry for a win after a tough loss to Towanda. Kickoff is set for 7 pm.