On September 11, 2001, and the days that followed, something life-changing happened to us as a nation. At that moment in time, for the most part, we truly were one nation under God – indivisible. Our Police and Fire & Rescue personnel were thanked, loved, and respected for their bravery and sacrifice. Hundreds of them would lose their lives that day in an effort to save others. More law enforcement line-of-duty deaths occurred on September 11, 2001 than any other moment in the history of our country. Close to 3,000 lives were lost that day, and many more would die later from complications after being exposed to the collapse of the World Trade Center buildings.

In the midst of our pain as a nation, we came together and loved and encouraged each other through the nightmare. It did not matter if you were red, yellow, black, white, or brown – a Democrat, Republican, or Independent – male or female – young or old. For that moment in recent history, we stood united and looking beyond ourselves to the needs of others. At Ground Zero and across the country, people rushed to help each other locate loved ones who were missing. There were desperate phone calls with no answer. In the hours and days that followed, we saw the heartbreaking signs, posters, and pictures of missing sons and daughters, moms and dads, grandpas, grandmas, and little ones posted up and down Lexington Avenue and other places throughout New York. The last survivor was pulled from the collapse of the North Tower after 27 hours of searching. None the less the searching continued. People-of-faith gathered around the country to hold our nation’s leaders up in prayer. Theological differences were set aside.

As we prepared for today’s broadcast, The Home Page Network contacted County Commissioner Erick Coolidge and asked if he would be willing to help us put together a feature for 9/11. He was kind enough to say yes. We hope that you will take a few moments to watch Erick’s message as we remember and reflect on this moment in our country’s history.

From Erick Coolidge:
I believe we all have experiences in our lives where we remember where we were on certain events. And in doing so, we would pause and think perhaps about John Glenn circling the earth; Elvis Presley passing away; or President Kennedy being shot. But I’m sure we all can stop, those of us who were alive at that time, and remember where we were and how we felt. Or when we had the landing on the moon. That was a great accomplishment, and it mattered to all of us. Every one of us felt some measure of success in that event.
Now some of what I mentioned are tragic, and some are personal successes in the history of well-established efforts and investment to move us forward as a country and as a nation. However, this is 9/11 remembrance, and as we think about this experience, it has tremendous meaning to those of us for reflecting on that horrible loss of life that day – that expression of harm to our county and our nation.
Now let’s pause and think about how we felt then. We felt hurt, we felt harmed, we felt threatened, we didn’t know all the aspects of it at the time. But we knew where we were. Where was I? I was chairing the Commissioners meeting in the district justice office that day. David Cohick, the Emergency Management Director, came in and shared with me that there had been an accident; a plane had struck one of the towers. And we continued… there would be more information but didn’t share anything at the time. He came back a few minutes later and shared that they believed it wasn’t an accident because a 2nd plane had struck one of the towers. We immediately stopped the meeting and observed a moment of silence for what had just occurred in our country, without understanding the total impact, but were clearly shaken by the event itself.
Now, if you pause again and think about how that affected you, more importantly, how it affected all of us, I would suggest that it galvanized us as a people. Then again, what we were going to do beyond that was unknown because we were struggling – trying to understand what occurred and how that would ultimately change our lives forever. So, as emergency personnel and others tried to sort through the rubble, people had to sort through their emotions of what occurred that day.

But there’s something else that we might want to just really concentrate on. I mentioned earlier that this galvanized us as a people. What do I mean by that? It didn’t matter who you were, where you were, what age you were, your nationality, your faith… it didn’t matter. Because we were one. We were a people, a nation who had been hurt, who had been harmed, and who had been threatened.
So today, let’s take that moment as we reflect not only on what that event created but, more importantly, where we stand as a nation today. There’s some harm happening now, and with that in mind, wouldn’t it be a welcome turnabout if we could revisit the feeling of that experience – that we would have a chance to look at one another differently. Those feelings of pride in country; to be a part of who we are today. Let’s hope that as we work through this pandemic and all the unrest, that we recognize what this nation means to all of us. Change the approach of how we treat each other, show respect for this nation and for our flag and what it stands for. Because 9/11 helped us appreciate everything about who we are as America.

I pray, may God bless the United States of America. 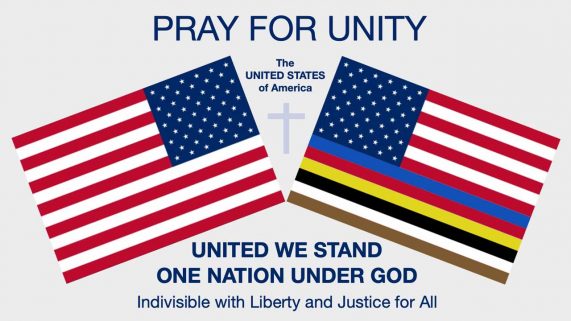