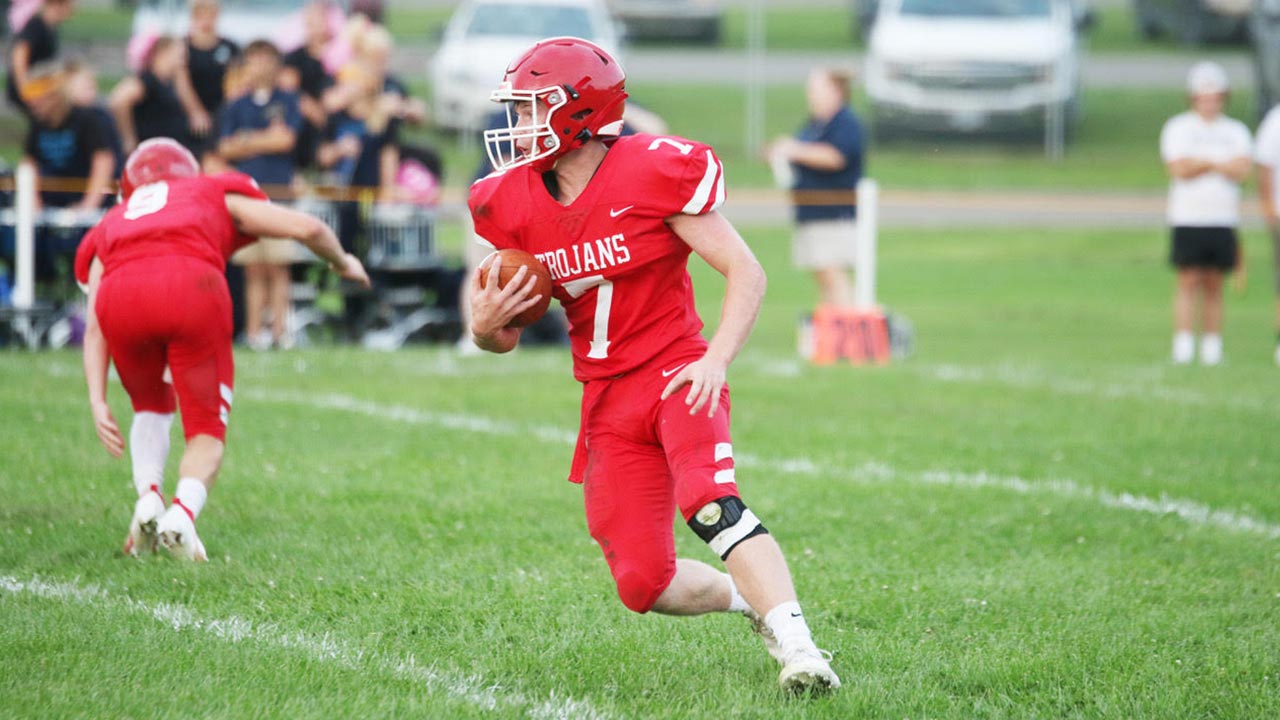 TROY — It’s safe to say in Jimmy Smith’s decade-long tenure at Troy that the Trojans have formed an identity. The Trojans play smash mouth, physical football on both sides of the ball, play as a team, and try to make less mistakes than the other teams. And while there will be new faces this year after the losses of all-time program greats Mason Imbt and Damien Landon among other key losses, it would be foolish to expect this program to take a step backwards in the 2022 season. It’s a roster full of players who have won a lot of football games growing up, and one devoid of weaknesses.

As always, Troy football’s success on offense will start up front.

“The leader up front of our line of scrimmage, emotionally and mentally is senior Cory Schucker. We also have a junior returning in Nick York, and they are both smaller guys, but tenacious little linemen. They bring a lot of experience and we return Mason Woodwardat tight end, who’s going to help to fill a leadership role. We have a multitude of younger guys that are going to be fighting for a couple remaining spots. It’s going to be interesting to see how it plays out.”

One position on offense Smith knows he’s set at is quarterback. Sophomore Evan Woodward will take over full-time quarterback duties after sharing them last year. Smith is excited with the size, toughness and passing ability Woodward brings to the offense.

The offensive backfield will be led by Clayton Smith. Smith was incredibly productive last year before breaking his collarbone midseason, and the junior projects to be near the top of the heap of NTL running backs.

“He’s a very talented explosive back that had almost 1000 yards and in basically five games to play. And they were five really tough teams. I feel like we were front end loaded. We’re really excited about him and his capability and his experience coming back. And if he can stay healthy, I think the sky’s the limit with him. He’s put on 30 pounds and he’s a lot more explosive I think than he was even a year ago.” Coach Smith said.

Smith was the lightning to Landon’s thunder last year, and while there isn’t one person that will step into Landon’s shoes, Coach Smith says that he has a lot of depth at running back and all skill positions, more than he’s ever had in his time with Troy.

The receiving corps is maybe the best crop in Smith’s tenure and features the Chimics brothers in Justice and Lincoln as well as Cameron Harwick.

“In talking with our line coach he’s feeling like we’re in a position where we we have more bodies, and I feel that there may be defensive line by committee. We’re going to have, I think, seven or eight capable kids, and a lot of them don’t have a lot of experience, but I think we’re going to be in a position where we’re going to have to find our way with them and try to figure out who stands out Onne guy in my mind is Jed Feldmeier. He’s a big strong kid,that’s intelligent and good with his hands and he’s worked hard with us all summer and he’s a guy that I think is gonna help fill a defensive tackle rell. We have Mason Woodward, who returns at defensive and he was very good a year ago.”

The linebacker group is led by Schucker, who may be the NTL’s premier run-stuffer. Clayton Smith and Jackson Taylor are expected to man the other starting positions in what will be a great position group for the Trojans for the upcoming season.

The secondary is deep as well. Evan Woodward returns as a starter at safety, and Justice Chimics and Cameron Harwick are also set to headline a deep secondary group that hopes to give opposing quarterbacks fits.

Troy’s schedule is as brutal as any team’s around, as they play non-divisional games against power programs Bald Eagle Area, Montoursville and Loyalsock to go along with an NTL Large School division that projects to be a very tough league given the size of the schools in it.

They open up with Bald Eagle Area on the road on August 26th. The home opener will be September 2nd against Montoursville.