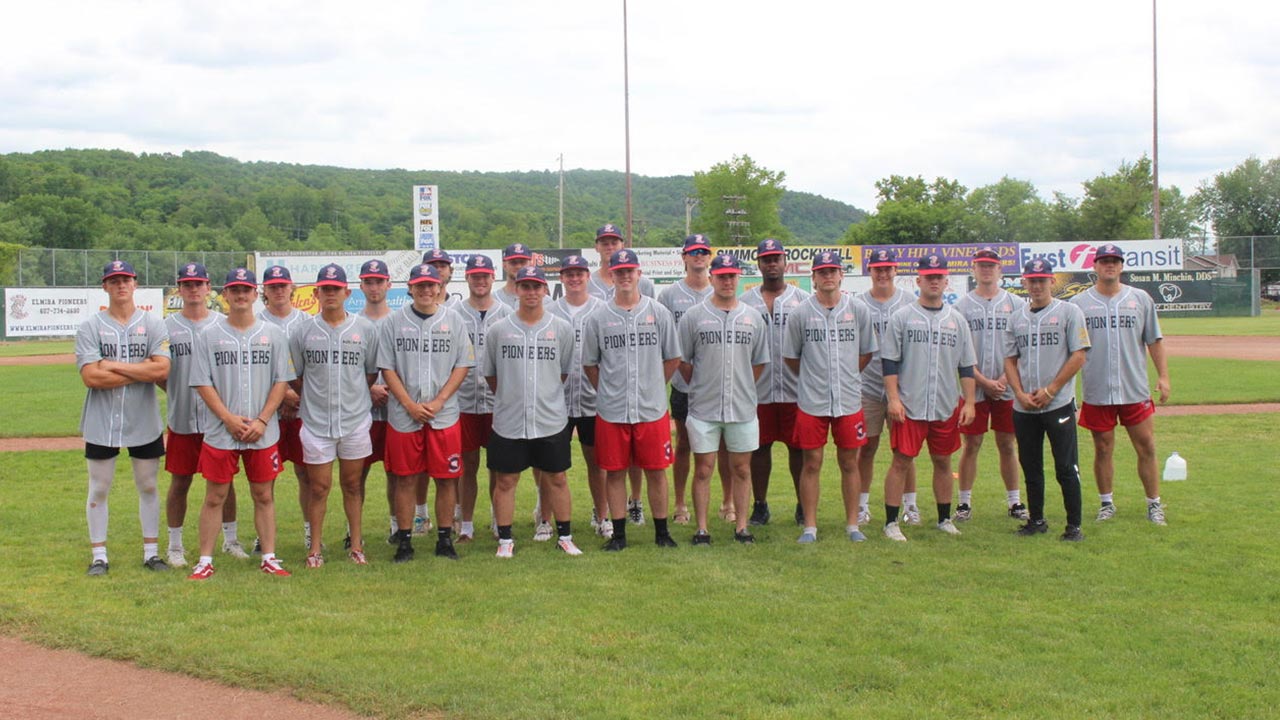 ELMIRA – The Elmira Pioneers baseball team started the 2022 season last Friday June 3 with an 8-2 home opening day loss at Historic Dunn Field. The team is currently winless after the first three games, but has a lot of excitement and optimism.

Starting pitcher Hunter Kendall from Troy High School, and going into his senior year at Houghton College, is a member of the Pioneers this season after playing on the Mansfield Destroyers of the New York College Baseball League (NYCBL) last summer. Kendall had 71 strikeouts in 54.2 innings pitched this past season with Houghton which was the third highest single season strikeout total in Highlander history. He also had the second best single season strikeouts per nine innings average in Highlander history with an 11.68 K/9 to go along with 35 walks and a 5.43 ERA.

Another local player on the Pioneers and former member of the NYCBL is Nic Ficarro of Sayre High School and Mansfield University. Ficarro played last season on the Genesee Rapids starting three games and making 15 appearances with 24 innings pitched with 18 walks, 11 strikeouts, and an 11.62 ERA.

Ficarro is happy to play summer ball close to home again this year, and to play for the team he cheered for growing up, “I’ve been to these games a lot when I was younger, so it’s nice to be on this team now.”

He also talked about his goals for the upcoming season, “It’s for me to prove myself and to help these guys out. Hopefully we make the playoffs and make a good push. I’m hoping to get an opportunity here.”

The Pioneers will once again be led by Elmira’s Southside High School native Andrew Drum for his second season as the head coach, and his sixth season with the team after ending the 2021 season with a 17-21 record.

“They come out with a great approach everyday at the plate and everyone is out here hitting good line drives, the pitchers look good and are spotting up, everyone looks to be in mid-season form already,” said coach Drum when talking about his confidence in his team before the season started.

He also talked about his expectations for the season, “Our goal is to win a lot of games and make a playoff push at the end of the summer. Especially here the fans always expect you to win every single night. We haven’t won a championship since 2007, so I think the fans are due for one.”

Coach Drum also added his appreciation for the fans and how important they are for the team each year, “Coming here and playing in front of 2,500-3,000 fans is the closest thing you’re going to get to a professional game. It’s a lot of fun. We get more fans than a lot of minor league teams do, so it’s a great atmosphere to play ball in and these kids get excited to play in front of them.”

The fans have been a huge part of the Pioneers’ success and longevity in the Perfect Game Collegiate Baseball League (PGCBL) since 2011, and the team’s long history going all the way back to 1888. This has led to the Pioneers averaging over 3,000 fans each home game for the last six seasons.

This excites the team and coach Drum, “I have a lot of former players that still call me and talk about how great of an experience they had playing here at Dunn Field, so that’s what they remember and take home from the summer. It’s definitely the biggest selling point.”

The Elmira Pioneers will continue their season tonight on the road at Damaschke Field at 7 p.m. against the Oneonta Outlaws.