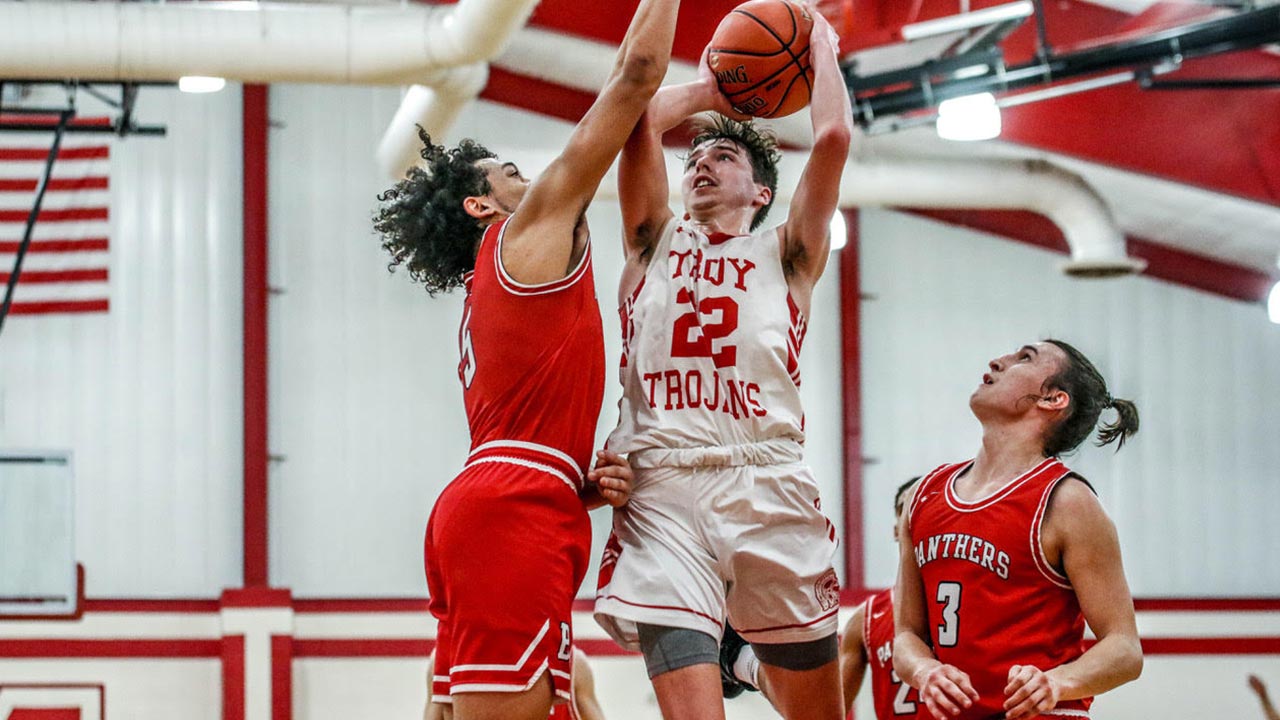 MONTGOMERY — Troy felt they had been disrespected. The Trojans, who came in with a record of 21-4, had heard all of the talk around district 4 about teams that were not then. They felt like, in Tuesday night’s semi final against Bloomsburg, they would have a chance to prove themselves, and challenged themselves to do that.

They rose to the challenge. Troy played one of its best games, was strong in all facets, and beat third-seeded Bloomsburg, 63-43 in the PIAA district 4 class AAA boys’ semifinals at the Montgomery area community complex Tuesday evening, reaching their first district final since 1996.

“They’ve been calling it the no talent league. The boys get a little fired up themselves when they hear that. We’ve got to play with a chip on our shoulder and play like the underdog. We’ll do that the rest of the way through,”Troy coach Steve Renzi said.

That’s exactly how Troy played all night. From the jump, it was the Trojans who brought more energy, were more focused, and got all of the loose balls.

“We didn’t mess around in practice this week, Coach Renzi lost his voice from practice. That’s how we are going to have to play if we want to contend with Loyalsock,” Senior captain Mason Imbt said.

Imbt, one of three seniors who have been four-year starters for Troy, dominated the inside all night. His 16 points on 7-11 shooting was coupled with 11 rebounds. Imbt was simply too strong for the interior defense of Bloomsburg, and his arsenal of moves and nifty post footwork was on full display Tuesday evening.

Our plan going into this game was to pound it inside because we know what they had. We knew they didn’t respect us very much, Imbt said. “

“That’s what we want him to do every night. I mean, these bigger games he’s really shown us how good he can be and we are really tough to beat when all three of us are going like this,” Barrett said.

Barrett had 24 points against a defense that was pretty focused on the near-2000 point scorer. When Bloomsburg had to apply more ball pressure in the 2nd half as they were chasing the game, Barrett took advantage with a flurry of great drives to the rim.

VanNoy continued his strong play of late with 12 efficient points, and the three combined for 52 of the Trojans’ 63 points.

Troy started out red-hot, and after an Imbt bucket-and-the-foul and a Evan Woodward three, they led 10-2 with just over half the first quarter remaining, and had taken all of the momentum. Bloomsburg fought back through buckets by HAC II player of the year Adam McGinley and Daniel Guzebich to quickly make it 10-6. After an Imbt bucket and a Bloomsburg foul shot, Troy led 12-7 after 1.

Troy would extend their lead in the 2nd quarter. A Bloomsburg 3 by Madden Locke was sandwiched around another Imbt score and a Woodward foul shot and Troy led 15-10. A few minutes later, after a McGinley three from Bloomsburg cut it to 19-15, Barrett instantly answered back with a trademark long three of his own and Troy led by seven, 22-15.

After a Bloomsburg bucket by Guzevich, Troy went on a run led by VanNoy. He started it off with a three, then got a steal, passed it to Collin Loveland who passed it ahead to Barrett for a layup. Finally, on the next possession, VanNoy had a fantastic spinning layup with just the right amount of english on it for it to spin in while drawing the foul. He made the ensuing free throw and Troy led 30-17. Nasir Heard would end the scoring of the first half with a basket, but Troy led by 11 heading into the break.

Bloomsburg got a huge boost on their first possession of the 2nd half. Nasir Heard scored and was fouled. He missed the ensuing foul shot, but the ball was immediately stolen away from a Trojan rebounder and Guzevich put it up and in through a foul. He made the foul shot, and Bloomsburg had scored five points in five seconds to make it 30-24. A Rae Grant layup made it 30-26, and it was game on.

The Trojans responded. Barrett drove in for a score, before an Oldroyd steal led to another Barrett layup. 90 seconds later, Woodward hit his 2nd three of the night, to give the freshman seven points, and all of a sudden Troy was up 11 again.

Bloomsburg would cut it to five a few times, and had it at five in the closing seconds of the quarter, but a deep Barrett three with nine seconds left made it 49-41 heading to the fourth.

It was the Trojan defense’s time to shine. The Troy defense hounded the Panthers, allowing just two points in the final frame and quickly put the game out of reach. The big three seniors scored all fourteen points for Troy in the quarter, as Imbt had eight to continue his strong game, his last basket coming at the 1:30 mark to put Troy up 20. A few seconds later, Renzi subbed out all five starters, sending the Trojan crowd that traveled in a strong contingent into a long and well-deserved standing ovation as Troy cruised home 63-43.

Troy will play Loyalsock for the district 4 class AAA championship at a time and place to be determined.