A new film researched, written, directed and produced by Gale Largey of Wellsboro. This retired Mansfield University sociology professor enjoys making fascinating documentary films about local history and people. The 90-minute film will be shown at 7 p.m. on Monday, June 14 in the Coolidge Theatre at the Deane Center for the Performing Arts at 104 Main Street, Wellsboro. This viewing is free and open to the public. Admittance is by donation. Reservations are not being taken. Admission is first come first serve.

“George Washington Sears was born on Dec. 2, 1821 and died on May 1, 1890. He was a pioneer conservationist, poet, adventurer, canoeist and outdoor writer whose pen name was “Nessmuk.” The film is done in the first person with local Brian Morral as the voice of Nessmuk who talks about his experiences growing up as the oldest of 10 children in Massachusetts, signing up when he was 19 for a three-year whaling voyage, moving to Wellsboro, helping a slave escape, being a Civil War volunteer, traveling to Brazil, going on canoeing trips in the Adirondacks in the 1880s and about the contents of his unusual will. Nessmuk was a fierce critic of the human toll on the natural environment as evidenced in his extensive writings in “Forest and Stream”, the forerunner of “Field and Stream.” It’s a community production,” Largey said. 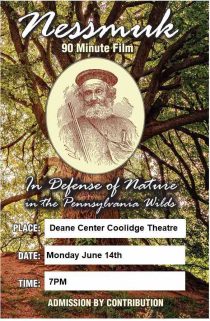