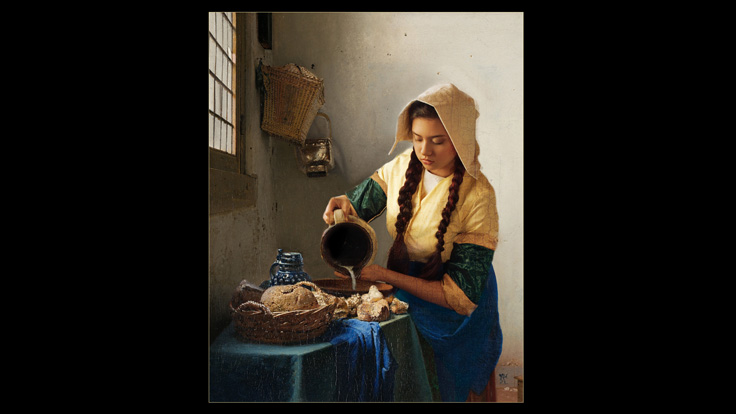 Caleb Williams, a local portrait artist and proprietor of Heritage Portrait Studio of Wellsboro, received three awards for a portrait at the September, 2017 meeting of the Northeast Pennsylvania Professional Photographer’s Association (NPPPA) in New Milford, PA. The trophies represented the Director’s Award, the Fella Award, and the Madison Trophy. The winning print is a color image of a young woman dressed in Dutch peasant garb pouring milk from a jug into a bowl. The portrait was a recreation of a famous Vermeer painting called The Milk Maid. The judges at the competition complimented Williams for managing to emulate the same lighting pattern on the subject as in the original painting. Williams said, “This portrait has special meaning for me, since Angelika Fenton is the daughter of Liberty and Clifford Fenton, the dairy farming family who rent the acreage where I live. As a retired dairy farmer, I honor all the work that goes into the annual production of crops, not to mention the daily task of milking the cows, to create a fundamental food for all the rest of us.”

Bernard E. Fella was one of the “founding fathers” of NPPPA, having been a part of the organization from the beginning. Family was also important and an integral part of the business was a brother Ed, a son Martin, and his son, Marty, Jr. Mr. Fella had strong views about the importance of portraiture in peoples’ lives, and the rules of the competition state that only professionally produced portraits are eligible for the Fella Award.

The NPPPA includes member photo studios from all of central and eastern Pennsylvania, south-eastern New York, and western New Jersey. NPPPA has three conferences each year, with educational programs, camaraderie, and a print competition held at each one. Williams received the “Photographer of the Year” award in 2012, and currently serves NPPPA as Vice-President.

Photo Caption: Bruce Dart, President of NPPPA, presents Caleb Williams with the Fella Award for the Member’s Choice of the highest scoring print, entitled “Dairy Farmer’s Daughter in the Style of Vermeer.”