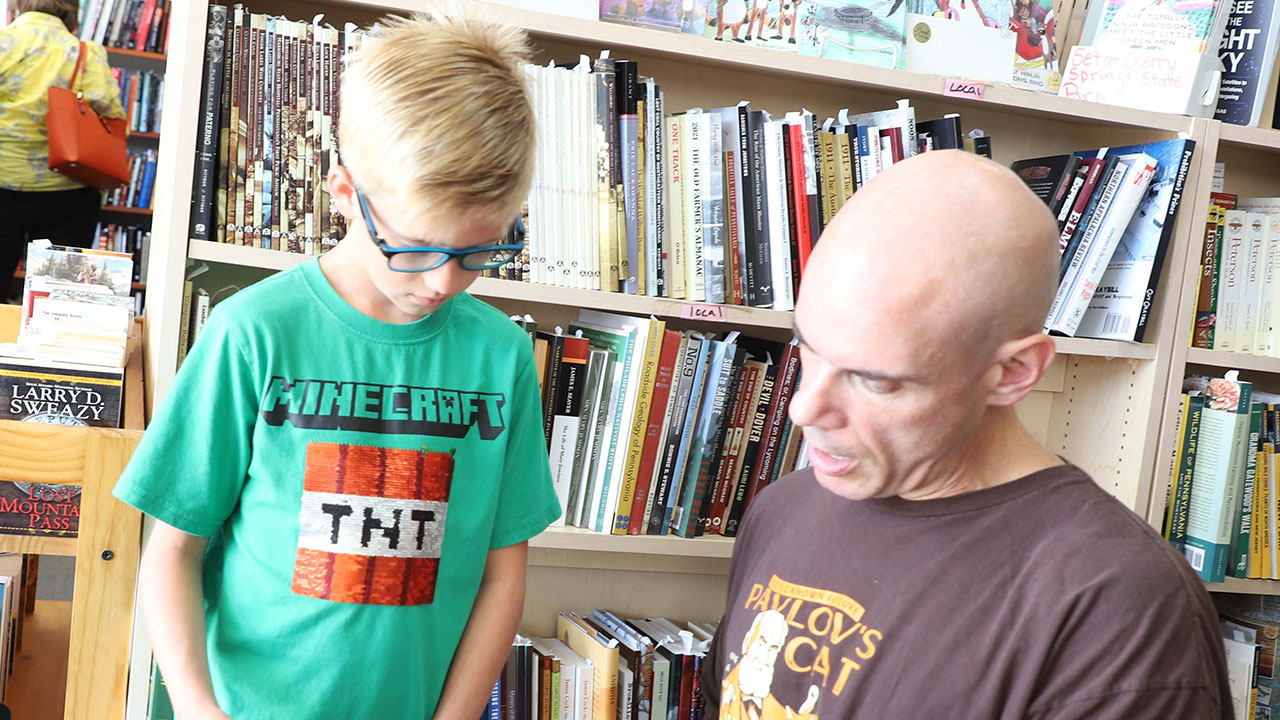 Photo by John Eaton
McKay Campbell tells Kevin Coolidge that he, his sister and mother visited all 25 businesses and were turning in their passports and that he is now reading his fifth Totally Ninja Raccoons book on his own.

At 2 p.m. on Friday, July 22, McKay Campbell, 10, his sister Lynnae, 12, and their mom, Kelly, all of Williamsport, turned in their completed passports at From My Shelf Books & Gifts at 7 East Avenue in Wellsboro.

“Kevin Coolidge, who wrote the Totally Ninja Raccoons book series and owns the bookstore, told us that we were the first people this year to have visited all 25 businesses and turned in their passports,” said Kelly.

“We checked the times the businesses were open on their Facebook pages and then made a plan. It took us two visits to Wellsboro to finish the hunt but we did it,” she said.

“On July 1, we spent about three hours to go to 18 of the 25 businesses and that included lunch. All of them were downtown,” Kelly noted.

“On July 22, it took us about two hours to finish and that included eating ice cream around noon. Four of the seven locations we were looking for were outside the borough, Omi of the Canyon, the Yellow Basket & Ice Cream Shop, Pag-Omar Farms Market and the Farmer’s Daughters. Three were in town, Tioga Office Products, Wellsboro Nutrition and Tony’s Pizza,” said Kelly.

“We think it’s great that Kevin includes information about area landmarks in his Totally Ninja Raccoons books. Not only do his books help reluctant readers ages 7 to 10 including children like my son who has dyslexia but also gets them interested in geography,” said Kelly.

“McKay finished reading Kevin’s book, the ‘Totally Ninja Raccoons Meet the Little Green Men.’ It talks about the stars and meteor showers you can see at Cherry Springs State Park. Now, at our children’s request, we’re planning a visit to the park,” Kelly said. “My husband works for DCNR so he is looking into where we can stay.”

She continued, “Right now, McKay is reading ‘The Totally Ninja Raccoons and The Secret of the Canyon.’ This is his fifth book of Kevin’s that he has read by himself. He and his sister want to go on a trip to see the Pennsylvania Grand Canyon, which isn’t far from Wellsboro.”

McKay’s gofundme page will be online through July 31. He has raised $460 plus other people have donated directly to the family. “We currently have $535 to provide the nine “Totally Ninja Raccoons” books to each library at the Williamsport Area School District’s two intermediate schools (4th to 6th graders) and three primary schools (K to 3rd graders), to the James V. Brown Public Library and others,” Kelly said. “It’s what McKay wanted to do to help others who may be reluctant readers.”