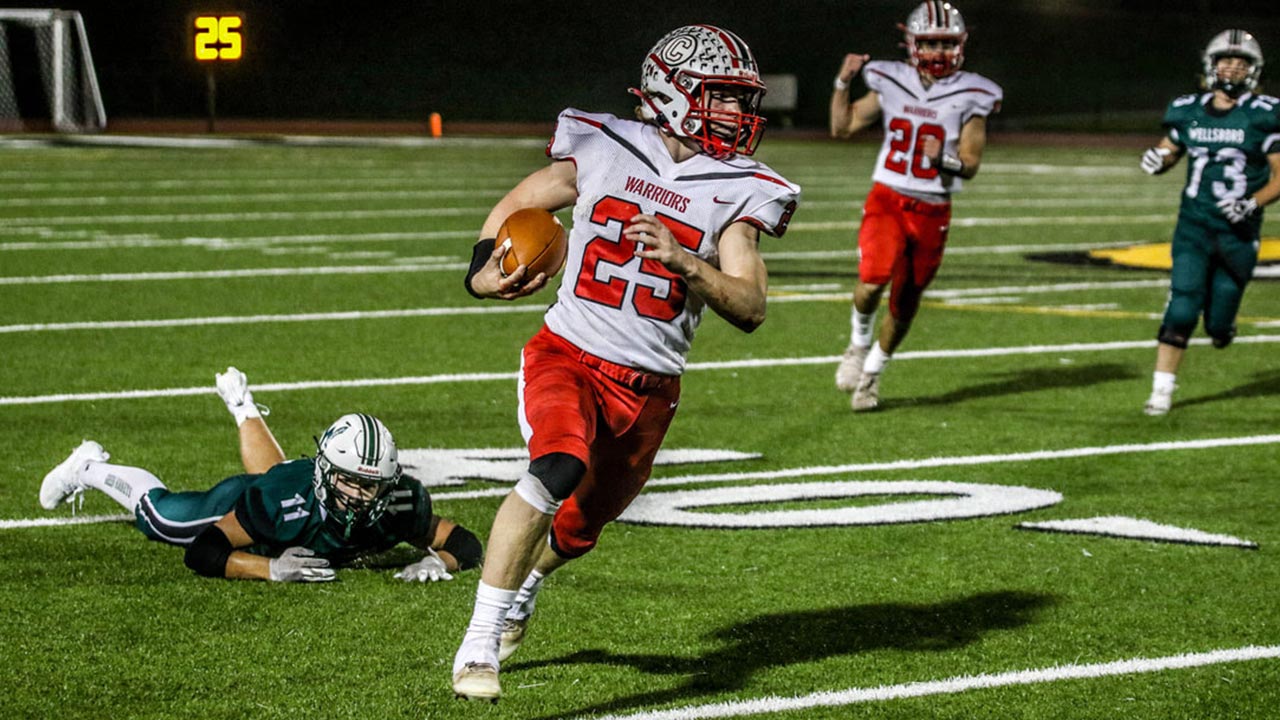 Warrior Football looking to go the distance in 2022

CANTON — Last year’s success was great, but it doesn’t mean a thing in 2022 if you ask the Canton Warrior football team.
Senior running back Riley Parker sums up what everyone is thinking, “Obviously all of us are thinking about a state championship and coming up short last year but we also just want to work harder than we did.”

The hope for Canton football is no secret, but head coach Tyler Sechrist says there is a lot of work to be done, “I know our goal is to get to that state championship and win it but a lot of things have to come together for that to happen and one of those things for us is to not look back at last year.”

Sechrist wants his team to forget last season and focus on this season, “Expectations are high. We have a strong core back of returning starters. We’re just focused on getting better every week and not resting on the laurels of last year’s success.”

​The Warriors dominated the NTL last year finishing 9-0 and beat Troy 36-0 at home to win the “Old Shoe” game.
​
Canton then made it all the way to the PIAA 1A Football Semifinals last season where they fell to Bishop Guifoyle 20-7 on December 3, 2021 in Altoona, Pa. Bishop Guifoyle then went on to win the PIAA 1A Football Championship defeating Redbank Valley 21-7. The Warriors final overall record was 13-1 in 2021.

Sechrist talked about how he plans on keeping his team focused, “I think you just have to keep them humble. It’s easy for them to get big heads and think we don’t have to work, we were that good last year. I think the focus is to bring back that loss in the semis when they were devastated and say if we want to get back there and maybe even further, we need to be focused on getting better each week. We can’t just think we’re good, we don’t have to work hard.”

The team will have 16 seniors returning this season along with several younger players who have had significant playing time last year.

The main issue that will need to be solved for Canton is at quarterback. Cooper Kitchen is gone, so the team will need to replace his 750 yards passing, 497 yards rushing, eight passing touchdowns, and 12 rushing touchdowns.

“I can’t tell you who our quarterback is right now,” said Sechrist. “We’ve got probably three or four guys that we’ve been working at quarterback and I think you’re going to see it stay at that, maybe narrow it down as the season starts to two, but we have athletes and we’re going to try different offenses.”

“We’re fortunate enough to be in that position, and I can’t name a starting quarterback right now,” added Sechrist when talking about having multiple players able to play quarterback.

Although the quarterback position is unclear, there is no doubt that the Warriors know their running backs.
Last season saw current senior Riley Parker rush for an NTL second place total of 1,401 yards and 24 touchdowns. Senior Hayden Ward added 585 yards and 11 touchdowns on the ground, and Bellows had 628 yards rushing with 6 touchdowns last year in support. Parker’s 1,735 all purpose yards were the most in the NTL followed closely by his teammate Bellows with 1,666 for second place.

Despite his totals last season, Parker wants to get even better, “Definitely my conditioning but I’m also looking to improve everywhere I can overall.”

Bellows was also a one man wrecking crew as a receiver with an NTL fourth place total of 523 receiving yards and four receiving touchdowns.

Canton didn’t have any kickoff returns for touchdowns last season, but they did have three punt returns. Bellows ran two punts for touchdowns, and Parker had one as well.

“I expect us to be right back in there again this year,” said Ward when talking about his goal for the 2022 season. “That’s one of our goals to get back and hopefully do better than we did last year,” he added.

Ward also talked about how the team has utilized game film, “We’re trying to focus on watching a lot more film and studying what we did wrong and what we need to fix just so we can run everything smoothly and do our best.”
Senior offensive guard and defensive tackle Gage Pepper mentioned what the team has worked on during the offseason, “We’ve been in the weightroom all summer. Working as hard as you can, bonding as a team.”

Pepper is the anchor of both the offensive and defensive lines for Canton.

“He’s just gotten better every year,” said Sechrist when talking about Peppers. “He got a lot of experience last year.”
Players like Furgeson will make sure the team is ready for the 2022 season, “Last year was last year, this year is this year so whatever happens this year is completely different, but it helped going that far last year for this year.”