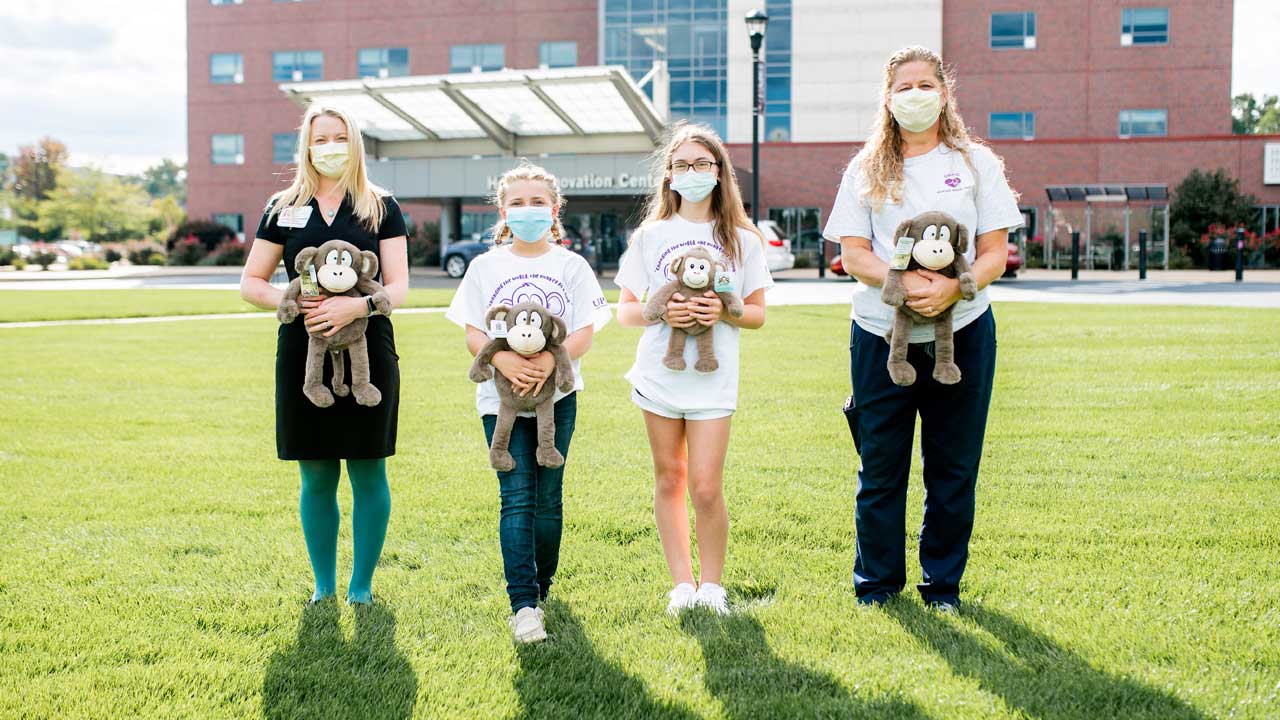 WILLIAMSPORT, Pa., September 13, 2021 – Staff at UPMC in North Central Pa. and representatives from Aly’s Monkey Movement recently celebrated a successful “Monkey Month” project supporting local donations to children and adults in need. Staff at UPMC deemed July as “Monkey Month” in an effort to help raise funds to support Aly’s Monkey Movement with a goal to sponsor 125 monkeys, equivalent to $2,500. By month’s end thanks to the generous support of staff, UPMC was able to contribute $7,375 in sponsorships to the program, nearly tripling their goal.

“I have seen these goofy-grinned, stuffed monkeys breathe new life into individuals as they meet open arms and hearts,” said Kristy Teisher, senior social worker, UPMC Williamsport. “Light radiates from that child, giving a moment of relief to the adult beside them and brings hope to the health care employee who spends day after day with people feeling their worst. These monkeys are the sunshine to a cloudy day, and we are forever grateful to Aly and her movement for brightening our world.”

Aly’s Monkey Movement provides stuffed monkeys to children and adults all over the world who may be experiencing a difficult time in their lives. Whether it be the loss of a loved one, or a diagnosis that leaves them hospitalized, the list goes on and on. The intention of the monkey is to provide comfort and joy in the midst of their fear. This movement began in 2019 when Aly was preparing for her tenth birthday. Aly had decided that she wanted to give back to her community for her birthday. She sacrificed a birthday party and gifts in exchange for donations to purchase as many monkeys as she could to hand out to boys and girls all over the world. Aly’s monkeys all come with a personalized tag that includes the monkey’s name, which she names after the individual who sponsored that monkey. To date, Aly has distributed over 5,000 monkeys to those in need.

“The support from UPMC has been overwhelming,” said Kristy Creasy, Aly’s mother who helps her daughter run the nonprofit. “These monkeys will make a huge difference to so many children and seniors that are in need of an extra boost of compassion.”

To learn more about Aly’s Monkey Movement, go to AlysMonkeys.org.

About UPMC
A $23 billion health care provider and insurer, Pittsburgh-based UPMC is inventing new models of patient-centered, cost-effective, accountable care. The largest nongovernmental employer in Pennsylvania, UPMC integrates 92,000 employees, 40 hospitals, 800 doctors’ offices and outpatient sites, and a more than 4 million-member Insurance Services Division, the largest medical insurer in western Pennsylvania. In the most recent fiscal year, UPMC contributed $1.7 billion in benefits to its communities, including more care to the region’s most vulnerable citizens than any other health care institution, and paid more than $900 million in federal, state, and local taxes. Working in close collaboration with the University of Pittsburgh Schools of the Health Sciences, UPMC shares its clinical, managerial, and technological skills worldwide through its innovation and commercialization arm, UPMC Enterprises, and through UPMC International. U.S. News consistently ranks UPMC Presbyterian Shadyside among the nation’s best hospitals in many specialties and ranks UPMC Children’s Hospital of Pittsburgh on its Honor Roll of America’s Best Children’s Hospitals. For more information, go to UPMC.com.