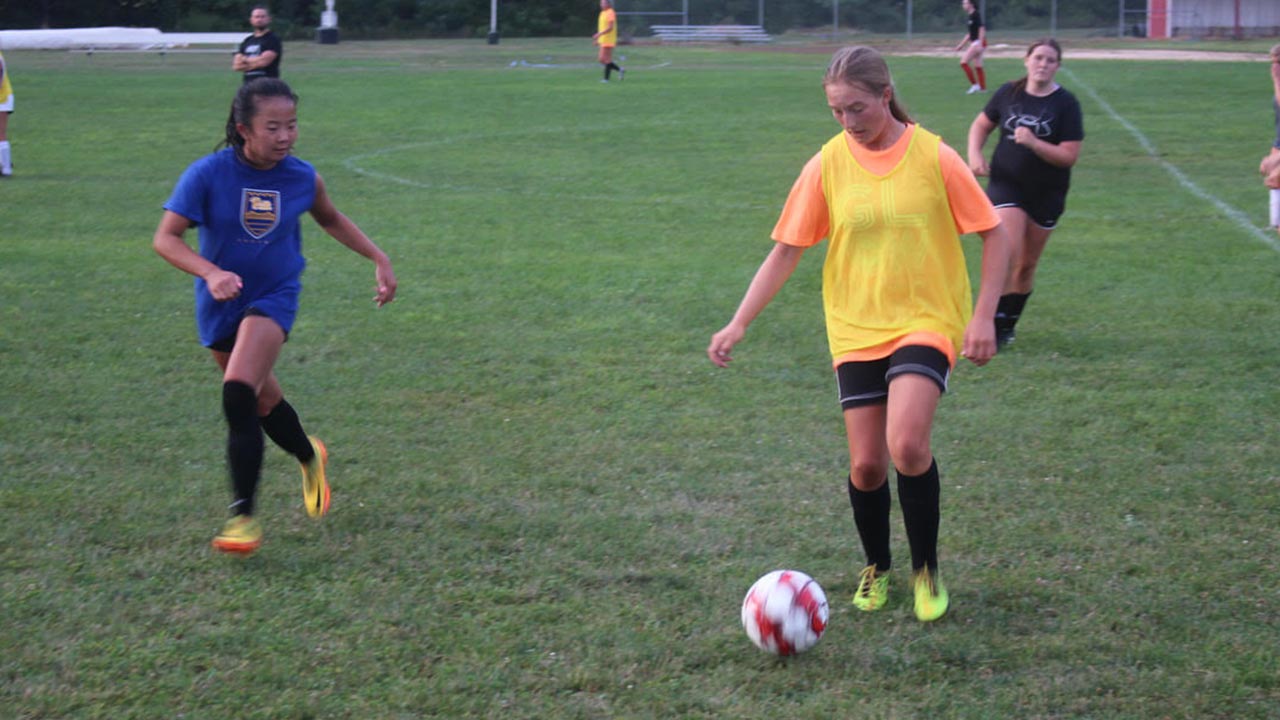 TROY – The goal for the Troy girls soccer team in 2022 is very clear, they want the NTL three-peat. Expectations are high, and they should be. The team shared the first title with Wellsboro and Athens, and then owned it all on their own last season with a 12-1 record in league play, and a 14-4 overall record.

Senior left forward Makenna Matthews has a clear outlook for the upcoming season.

“​My expectations are for us all to work as hard as we can and defend our title,” said Matthews.
Matthews also talked about how she plans to help the team, “Using my speed and skills to help them and benefit them the most.”

Senior left wing Taylor Williams wants even more than just the title this season, “I’m looking forward to us working together, getting the NTL title and winning more than one district game this year.”

​Williams also has her own goals which include, “Being a leader, helping my teammates, and communicating.”
Junior Chloe Swain talked about what all of the leaders of the team are focusing on, “We have a whole bunch of freshmen so we have to introduce to them how we play soccer.”

“There’s a lot of big shoes to fill,” said senior midfielder Caelyn Pine when talking about the nine seniors that left the team last year. The 2022 team will also lose nine seniors after the season.

“We had a really great team last year, but I am so excited,” said Pine. “We have so much new talent.”
Pine also talked about what she focuses on, “I definitely try to be a leader on and off the field. I try to direct them on the field and let them know where they are and where they need to be. I just want to be there for them if they need me for anything.”

Matthews, Williams, Swain, and Pine are the Captains for the team this season.

Coach Pratt has high hopes for the team this year, but there will be a lot of work to do when the season ends.

“We have to start this year to get ready for next year,” said Pratt when talking about his team being very young outside of his seniors.

“After our seniors we really drop down to a lot of sophomores and freshmen, so we just have to teach them,” said Pratt.

Coach Pratt has the three-peat as his goal for the season, but he doesn’t want to get ahead of himself.
“
All I ask of the girls is to give us 100 percent at the game and let the cards fall where they fall,” said Pratt. “I think the competition is pretty good in the NTL this year, so we expect to have some really great games.”

“We hit districts and play the teams down south,” said Pratt. “They’re tough, but we slowly get closer and closer to that talent down there.”

The girls team will feature sisters from Canton with Camille and Alexis McRoberts. Camille is a senior attacking midfielder and her younger sister Alexis is a freshman rightwing.

“It’s amazing because we played together for our whole life growing up so I’m excited to see how this season goes,” Alexis said when talking about getting to play soccer with her sister in highschool.

Camille also said she is excited to play her younger sister, and tries to be a leader on the team.

​Camille describes herself as, “Definitely being a hard worker.” “If someone sees you being a hard worker, they are automatically going to try a bit harder and I feel like if I’m just myself working hard, I can encourage a lot of other people,” said Camille.