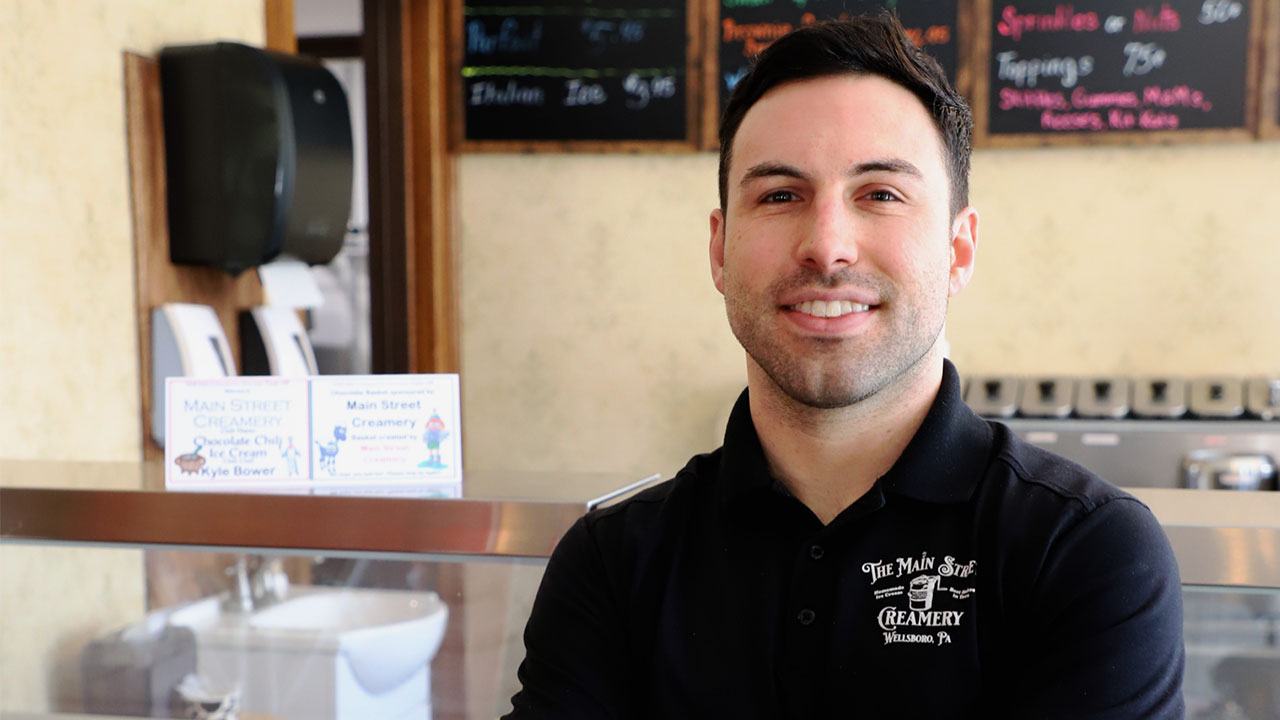 Jim Howe, organizer of the 2022 Chili With A Chance For Chocolate Taste-Off and Second Chance Animal Sanctuaries president, announced the first through third place taste-off winners on Saturday, Feb. 12. This was the seventh taste-off held since the first one in 2015. It is a Wellsboro Winter Celebration event.

The 258 people who bought a $5 taste-off passport had the opportunity to try all or some of the 13 different types of chili beginning at 11 a.m. on Saturday. They cast their votes and then turned in their passports at any taste-off location by 2 p.m.

Taking first place was Kyle Bower with his Chocolate Chili with Almonds Ice Cream. He is the ice cream maker for The Main Street Creamery.

Second place winner was Zack Luczak with his Wine-ing for Chili made with Cabernet Sauvignon. He is an employee at Oregon Hill Winery at 87 Main Street in Wellsboro.

Taking third place was Jason Coons who made his own version of Pennsylvania Chili, for which Nevada Annie was named the Chili World Winner in 1987. He is an employee at Wild Asaph Outfitters at 71 Main Street in Wellsboro.

“I grew up in the Hudson Valley of New York and had moved to Portland, Oregon where I worked for an ice cream company for five years,” said Bower. “I was the warehouse manager and had nothing to do with actually making the ice cream. They would come out with five unique flavors each month. I eat lots of ice cream and was interested in what they did and how they did it.

“Both of my parents are Wellsboro natives and we had property here. During a visit to Wellsboro on Thanksgiving in 2019, I spoke with Rick and Lori Beckwith and they talked me into coming to work for them making ice cream.

“I moved to Wellsboro in October of 2020 and started working for them in March of 2021.” Bower worked with Rick to learn how to make ice cream.

“In 2021 between the end of March and November, I made a new flavor of ice cream every week. One of our biggest new hits was Take A Hike. It is lemon-based with fresh blueberry puree and homemade granola. I played on the rivers, rocks and trails theme, which is what Wellsboro is known for,” he said.

“Lori and I had talked about making a special chili ice cream for this year’s Taste-Off. I remembered eating a chili and cinnamon infused chocolate bar that I loved and used that for the basis of the recipe. I started with a dark chocolate base, added a bit of cinnamon and cayenne pepper. Then I roasted almonds with sugar, cinnamon, and chili powder and added a milk chocolate fudge. Each person sampled two ounces and would say they couldn’t taste the spice at first but did after a few bites.”

“We received amazing feedback about Kyle’s chili ice cream,” Lori said. “We will probably incorporate it into our regular lineup of flavors,” she added.

“All 13 chili chefs received a bottle of honey from Draper’s Super Bee Apiaries, Inc. in Millerton, “said Howe. The top three winners each received one gift certificate. The gift certificates were provided by Oregon Hill Winery at 87½ Main Street, Senior’s Creations at 75 Main Street and Garrison’s Clothing at 89 Main Street.

Proceeds from the sale of the passports will benefit rescued animals and programs offered by Second Chance Animal Sanctuaries, according to Howe.