PUBLIC AND CHAMBER MEMBERS ASKED TO CONTRIBUTE ITEMS FOR SILENT AND LIVE AUCTIONS BY MONDAY, MARCH 11

Members of the community and of the Wellsboro Area Chamber of Commerce are asked to contribute items for auctions being held during the Wednesday, March 20 Chamber Mixer.

There will be “live” auctions of items at various times during the event and a silent auction. Auction proceeds will benefit the chamber-sponsored Pennsylvania State Laurel Festival Family Day and Children’s Health Fair being held on The Green on Saturday, June 8 from 10 a.m. to 2 p.m. “This is a day for children and their parents to discover the many health services available in our area and encourage healthy choices,” said Julie VanNess, chamber executive director. “During this free day of fun activities, children can find out how easy making healthy choices can be.”

Items donated for the Chamber Mixer auctions directly support this event. “The auctions add a little fun and excitement to the mixer for our members and the public, and the proceeds help area children,” VanNess added.

Those who plan to donate items for the auctions are asked to contact VanNess on or before Monday, March 11 by calling (570) 724-1926 or emailing her at JulieV@wellsboropa.com.

Tuesday, March 12 at 1 p.m., Ray Corse of Sullivan Township will play his accordion and sing during the Golden Afternoons program in the lobby at the Deane Center for the Performing Arts at 104 Main Street in Wellsboro. Refreshments will be provided. The program is free and open to those 55 years of age and older.

Corse has been playing the accordion for 66 years, since he was five years old. The majority of the songs Corse will perform are from the 1900s to the 1970s. On his playlist are polkas, country and rock and roll songs, such as “The House of the Rising Sun,” “Proud Mary,” “Have I Told You Lately That I Love You,” “Tear In My Beer,” “Love Letters in the Sand,” “Crazy” and “Grandma’s Feather Bed,” a tune released by John Denver in 1974. He also will perform several songs from the 1800s like “When You and I Were Young Maggie.”

In addition, Corse takes requests. “If I can whistle or hum a tune, I can usually play it. Everything I play is by ear,” he said. 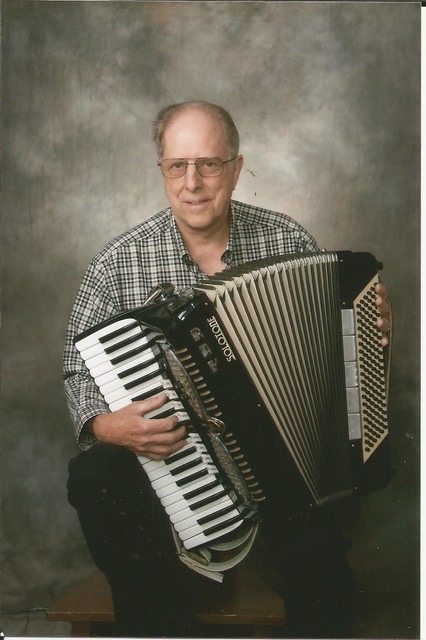 Ray Corse will sing and play his accordion for those attending the March 12 Golden Afternoons program in Wellsboro.

The last Flies and Lies Social will be on Saturday, March 16 from 9 a.m. to noon at the Wellsboro Community Center, 3 Queen Street in Wellsboro. This free event is open to the public. There will be free donuts and coffee.

During the social, Trout Unlimited Tiadaghton Chapter #688 members are offering free fly tying lessons for children and adults. Equipment and materials will be available for beginners to use.

Those who have no experience to the most experienced are welcome to stop in and watch or participate.

“Flies and Lies is open to anyone, men, women and children, fishermen and non-fishermen,” said organizer Bill Paulmier. Youth 14 and under must be accompanied by an adult. “This will be a casual, informal session. Folks can stop in and visit any time between 9 a.m. and noon,” he said.

“This social gives area fly tiers a chance to meet, swap ideas, materials and techniques as well as to tell a few fishing tales,” said Paulmier. “People attending are welcome to bring in fishing items to sell or trade from used tackle, to fly tying materials or other fishing related items. We are not holding a formal swap meet or table sale.” 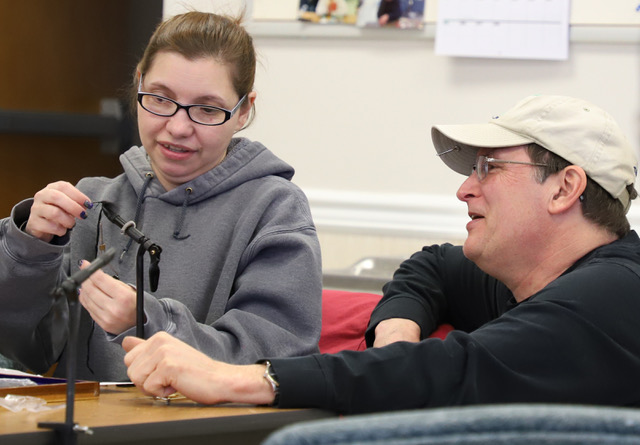 Photo by John Eaton
Amy Geiser learns how to tie a fly under the guidance of TU Chapter #688 member Art Antal at last year’s Flies and Lies.

The Step Outdoors Winter Outings Series in Tioga and Potter counties will officially end on Saturday and Sunday, March 16 and 17 with the two-day Maple Weekend Open House at Hills Creek State Park, a mountain or snow bike ride on March 17, the Tyoga Running Club’s hourly run in Wellsboro on Thursday, March 21 and the last Lyman Run Winter Adventure Hike on Saturday, March 23.

Bring the whole family to Hills Creek State Park between 10 a.m. and 3 p.m. Saturday and Sunday, March 16 and 17 for the Maple Weekend Open House. Free and open to the public, the two-day open house is being held in conjunction with the Potter-Tioga Maple Producers 15th Annual Maple Weekend. The park is in Charleston Township, seven miles northeast of Wellsboro in Tioga County. The park’s GPS address is 111 Spillway Road, Wellsboro, PA 16901.

At Hills Creek, plan to spend 45 minutes to experience what each maple station has to offer. At the park’s sugarhouse, located near the beach parking area and large pavilion, visitors can find out how to ‘tap’ into this natural resource in their own backyards and see how pure maple syrup is processed from tree to table and taste the finished product.

Learn how to identify maple trees, how to tap them and collect sap, how the finished product is made and about the history of maple syrup making.

Large groups should contact the park by calling (570) 724-4246 to schedule a private tour either on Maple Weekend or on a different date as Mother Nature allows.

The Potter-Tioga Maple Producers 15th Annual Maple Weekend will be on Saturday and Sunday, March 16 and 17. The 17 participating maple producers, including 11 in Tioga County and 6 in Potter County, will be open from 10 a.m. to 4 p.m. each day. To download the 15th Annual Maple Weekend brochure, which includes directions to each producer’s location, visit www.pamaple.com. For more information, call Association President Dale Miller at (570) 724-7907 or (570) 439-5453.

Mountain or Snow Bike Ride on March 17 at Asaph

This Sunday, March 17 as well as on Sundays, March 24 and 31, Oswald Cycle Works is sponsoring Mountain and Snow Bike Rides starting at 9 a.m. at the U.S. Geological Survey’s Northern Appalachian Research Branch at 176 Straight Run Road in Asaph in Shippen Township, eight miles west of Wellsboro. For weekly updates on equipment and clothing needs based on weather conditions, contact Tom Oswald at (570) 662-3097 or tom@oswaldcycleworks.com or visit https://www.facebook.com/OswalCycleWorks/.

The Tyoga Running Club is hosting its last one-hour Thursday Night Run in Wellsboro on March 21. Meet at the Packer Park parking lot behind the Wellsboro Senior Center at 3 Queen Street. The run will begin promptly 6 p.m. Wearing a headlamp is recommended. There are different pace groups with varying distances for runners of all ages and ability levels. For information, email run4trc@gmail.com or visit www.facebook.com/tyogarunningclub.

On Saturday, March 23 at 9 a.m. leave the Day Use Area parking lot at Lyman Run State Park (GPS address: 454 Lyman Run Road, Galeton, PA 16922) to go on a one to two-hour hike with outdoorsmen Chip Harrison and John Halter to explore several areas that are off the beaten path. This free hike is considered moderate to difficult and is for more experienced hikers due to some climbing and off-trail travel. Participants should dress in layers and bring plenty of snacks, water and/or hot beverages and hiking staffs, trekking poles or walking sticks. The hike will be cancelled if the weather is severe. For information, call Harrison at (814) 435-2518 or the park at (814) 435-5010.

To learn more about all Winter Outings events or for updates, trail conditions, directions and more, call (570) 724-0300 between 8:30 a.m. and 4 p.m. weekdays or visit https://www.stepoutdoors.org. Snow and ice updates are also posted on Facebook at Step Outdoors Tioga County PA.

Manmade canals built in the 1900s, hurricanes, construction of a coast-to-coast road from Tampa to Miami, the impact of global warming and climate change on sea-level rise and weather events and artificial structures built to regulate water are among the reasons why the Cape Sable seaside sparrow, first put on the endangered species list in 1967, remains on that list today. Why is learning about efforts to save this seaside sparrow from extinction in the Florida Everglades important to Pennsylvanians?

Find out the answers to these questions and more by attending the Tiadaghton Audubon Society meeting on Wednesday, March 20 in the old music room at the Wellsboro High School administration building at 227 Nichols Street in Wellsboro. The meeting will begin at 6 p.m. and after a brief break will be followed at 7 p.m. with a PowerPoint presentation about the Cape Sable seaside sparrow by Dr. Sean Murphy. Both the meeting and Dr. Murphy’s presentation are free and open to the public.

“During my talk, I will cover many facets of this 30-year, long-term project to save this songbird,” said Dr. Murphy.

Prior to Hurricane Andrew in August 1992, there were 6,576 Cape Sable seaside sparrows inhabiting Everglades National Park, the only place they are found. Due to many factors, by 1993 the sparrows had declined to 3,312 and by 2014 to 2,720.

In 2016, the United States Fish and Wildlife Service developed a revised set of targets to improve the conditions of this sparrow and to contribute to its survival and recovery. Conservation efforts include annual range-wide population surveys by ground and helicopter, vegetation and hydrologic monitoring, use of prescribed fire to control woody vegetation, controlling wildfires to protect sparrow habitats and banding birds so they can be identified in the future.

In January of this year, Dr. Murphy was named the state ornithologist to head the Pennsylvania Game Commission Wildlife Diversity Division’s Endangered and Nongame Birds Section. In 2001, he earned a B.S. degree in Ecology from Penn State University and in 2010, a Ph.D. in Biology from City University of New York. He did graduate work on the population biology of the American oystercatcher in Nantucket, Massachusetts. He began his research in 2005 and finished it in 2013.

“I was always interested in population biology and during my undergraduate years at Penn State bounced around from marine birds to game species in Pennsylvania to population biology,” said Dr. Murphy. “Dr. Richard Veit was my graduate advisor at City University. He is an ornithologist. By the end of 2003 I was into ornithology and since then haven’t studied anything other than birds.”

He moved to Oregon in 2010 to work as a wildlife biologist with the U.S. Geological Survey in Corvallis on water and climate effects on birds in the Great Basin. His focus was on the interactions between a variety of avian species of conservation concern and their environment. He led multiple studies on the population dynamics, life-history, and habitat use for marsh birds, shorebirds, and seabirds. Dr. Murphy continues to be involved in this project. He recently published a paper on historical changes to waterbird communities related to climate and hydrology changes.

In March 2016, Dr. Murphy relocated to Williamsport, Pa. and began working for Conservation InSight. He helped develop a spatially-explicit population estimator for the endangered Cape Sable seaside sparrow and implemented new survey protocols to improve current data collection methods. “I am still helping InSight finish up some of the work I was doing. This nonprofit organization began doing research on this bird in 2008 and plans to continue that research in the future,” he said.

He, his wife and their two daughters currently live in Williamsport where he spends most of his free time with his family. He enjoys hiking, biking, and birding.

Park near the handicapped entrance at the rear of the administration building at 227 Nichols Street. Inside, signs will direct people to the old music room where the meeting and presentation will be.

For more information, contact the Tiadaghton Audubon Society by email at tasmember@yahoo.com or Sean or Robin Minnick by phone at (570) 948-9052. 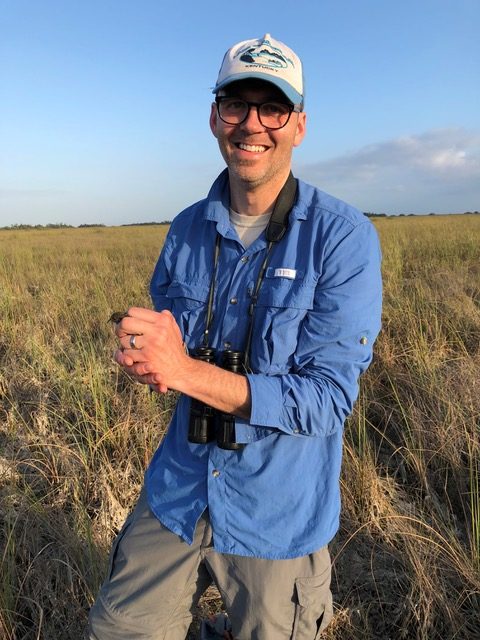 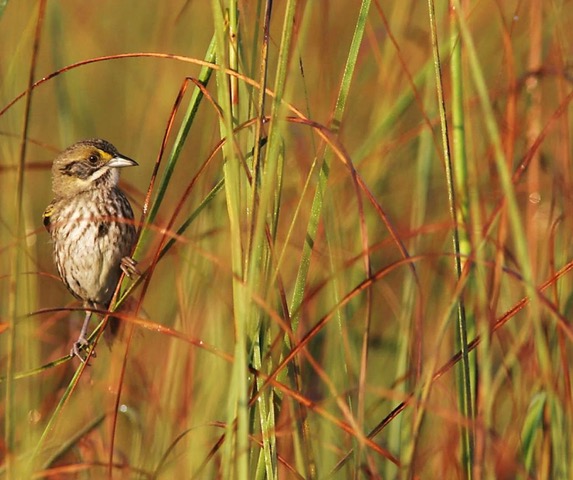