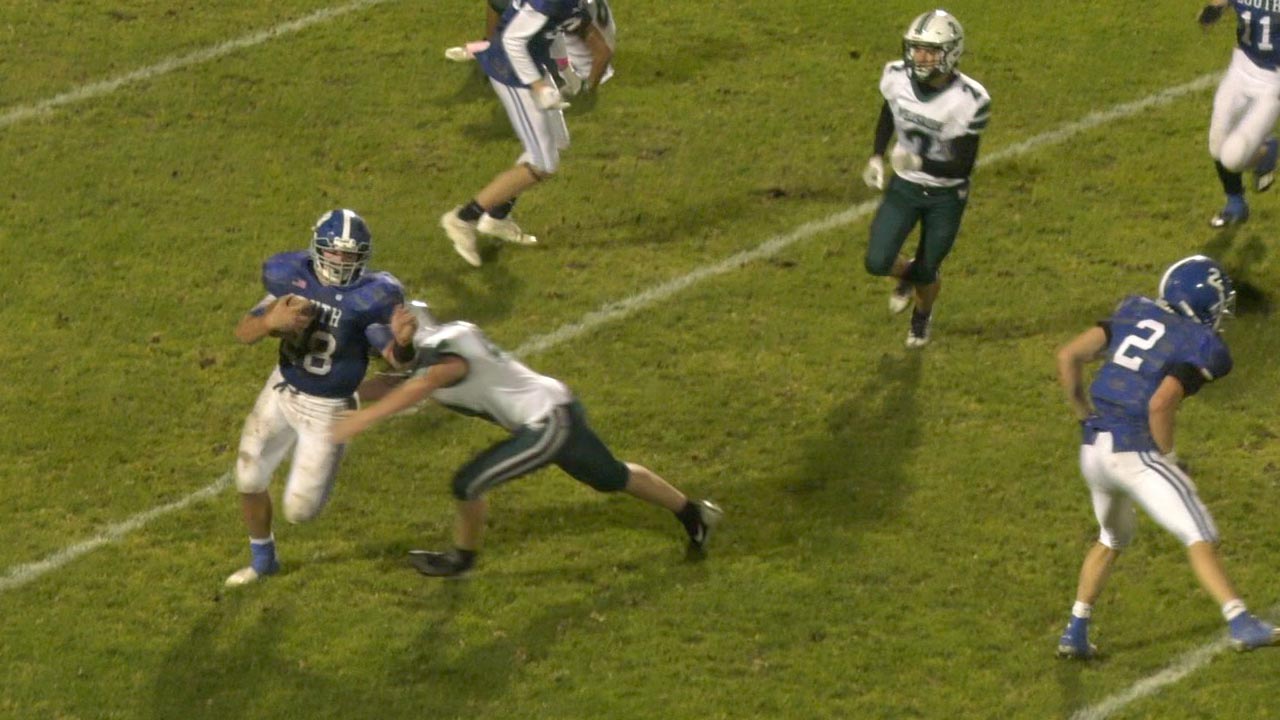 South Williamsport racked up 391 yards in total offense, 336 coming on the ground, in a 20-0 shut out victory over Wellsboro for Homecoming on Friday, October 14.

The Mountie duo of Ryan Casella and Caden Harris accounted for 333 yards rushing. Casella rushed 23 times for 220 yards while Harris carried the ball 12 times for 113 yards.

All of South’s touchdowns resulted from big plays on the ground. Midway through the opening quarter Casella found a crease in the Wellsboro defense and took the ball 36 yards for the score. A botched snap on the point after try kept the Mountie lead at 6-0.

Harris scored South’s second touchdown of the evening as he broke free on a 62-yard run with 53 seconds remaining in the first half to make it 12-0 after a failed two-point conversion.

South’s final score came with 3:05 elapsed in the third quarter. Following a 71-yard run by Casella, Radley Knapp called his own number on the QB sneak from 2 yards out. This time, the two-point conversion pass from Knapp to Casella connected, and the Mounties led 20-0.

The Hornets got within one yard of erasing the shut out late in the third quarter and early into the fourth. After the Hornet defense stopped the Mounties at their own 19, Wellsboro took over and put together a 12-play drive, their best of the night. After an opening run by sophomore Ryder Bowen, the Hornets went to the air with sophomore quarterback Will Gastrock. Gastrock completed six passes on the drive, 4 to senior Spencer Wetzel and two to senior Jack Poirier. These passes, along with two South penalties maneuvered Wellsboro down to the 5. From there, Gastrock picked up a gain of four to get down to the one, but the Mounties defense held for the goal-line stand, keeping the Hornets out of the end zone.

Knapp finished 7-of-15 through the air for South with Landyn Gephart (39) and Harris (20) each making three catches.

Gastrock completed 15 of his 26 pass attempts for 131 yards. Wetzel made 9 catches, one shy of Nick Marple’s record of 10 (against Wyalusing, 2014) in a single game, for 69 yards. Poirier (13), senior Conner Adams (45), and Bowen (4) all caught two passes each. Wetzel also led the Hornets with 16 tackles (a career-high) and a forced fumble. Bowen and senior Cameron Brought had 13 tackles each, Will Gastrock finished with 11, senior Wyatt Gastrock added 9, senior Blake Levindoski added 7 stops, and junior Hayes Campbell recorded 6 tackles and a sack.

Next up for the Mounties (4-3, 4-2 NTL Small School Division) is a non-league game against Hughesville, 21-0 winners over Towanda. Wellsboro falls to 1-7 (1-6 NTL Large School Division). The Hornets travel to Wingate, PA next week to take on Bald Eagle Area.