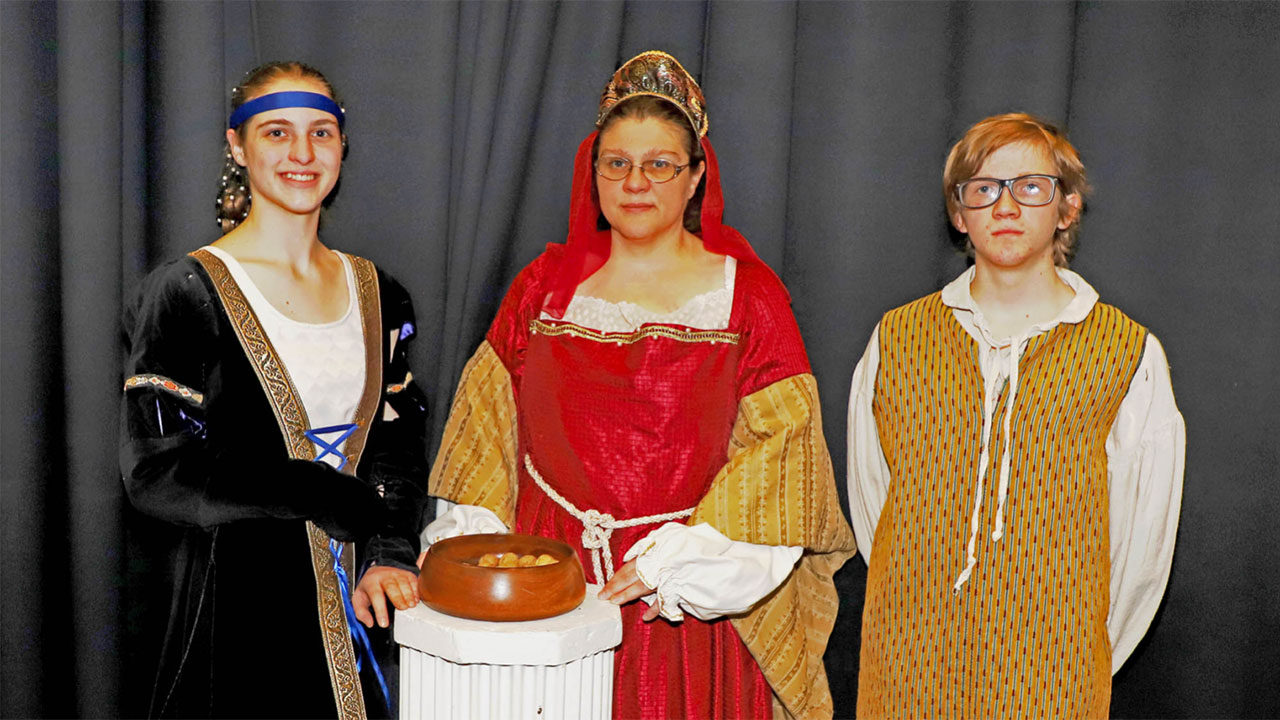 Photo by John Eaton
Shown in their “Shrew: A Tale Retold” costumes are members of the Bishop family including (from left to right) Grace as Bianca, Anne as Baptista and Thomas as Curtis. Not shown is George Bishop who is a stagehand along with his brother, Thomas.

The four performances of Hamilton-Gibson’s “Shrew: A Tale Retold” open this Thursday, March 3 at 7:30 p.m., continue at 7:30 p.m. this Friday and Saturday, March 4 and 5, and will end with the last one at 2:30 p.m. this Sunday, March 6 in the Coolidge Theatre at the Deane Center for the Performing Arts at 104 Main Street in Wellsboro.

The opening night reception catered by The Red Skillet will immediately follow the Thursday night show.

“Those who see this version of ‘Taming of the Shrew’ will laugh a lot,” said Director Clare Ritter. “The script is written in modern English making it easier to understand than Shakespeare’s original style.”

Represented in this romantic comedy are the misunderstood female lead, the leading man you want to dislike but learn to love, the comic sidekicks and the clueless parents.

Of the 15 cast members, five are from two families. Titus and Natalie Himmelberger of Wellsboro and Anne Bishop of Roaring Branch and two of her children have roles in the show.

The Himmelbergers, husband and wife in real life, play Petruchio and Katherine. Petruchio is a wealthy gentleman who wants to marry a rich woman so he decides to pursue the strong-willed Katherine.

“I didn’t realize that Shakespeare could be so funny,” said Natalie. “Not only is there verbal wit and banter, but physical comedy, too. Katherine’s strength and passion is misunderstood to be ‘shrewish’ but she finds that Petruchio is willing to not only match wits with her but treats her as his equal,” Natalie said.

“I like how confident Petruchio is, and even though he is a real pain, he always has method to his madness,” said Titus.

Anne Bishop plays Baptista Minola. Although many men are seeking her youngest daughter Bianca’s hand in marriage, Baptista refuses because she wants Katherine, her eldest, to marry first. The problem is no one is courting Katherine. Then along comes Petruchio.

“Originally, I was cast in a small role but when the show had to be re-cast thanks to the virus and other things, I was promoted to playing Baptista,” said Anne. “I love being in this show because I am participating with my kids and because it’s Shakespeare,” Anne said.

“Bianca is manipulative and gets her own way most of the time,” said Grace, Anne’s 16-year-old daughter. “She is a mean, snarky little sister and really good at hiding it. Around her mother and others, she is the perfect, sweet angel. It’s so much fun playing her.”

Thomas, Anne’s 15-year-old son, plays Curtis, a servant in Petruchio’s household. “I am only in one scene and there is a lot of slapstick in it. This is the first time I have ever had to memorize lines,” Thomas said.

“Both Thomas and I are stagehands,” said George, Anne’s 13-year-old son. “In 20 seconds, we move scenery and props, like a fountain, pillars, large and small tables, and/or chairs, on stage and then off stage for each scene.”

A FlexPass is $75 that an individual can use to see six different shows or to attend one show and bring five friends.

Order tickets in advance at hgp.booktix.com or by calling the HG office at (570) 724-2079 with credit card information. Tickets will also be sold at the door, if available.