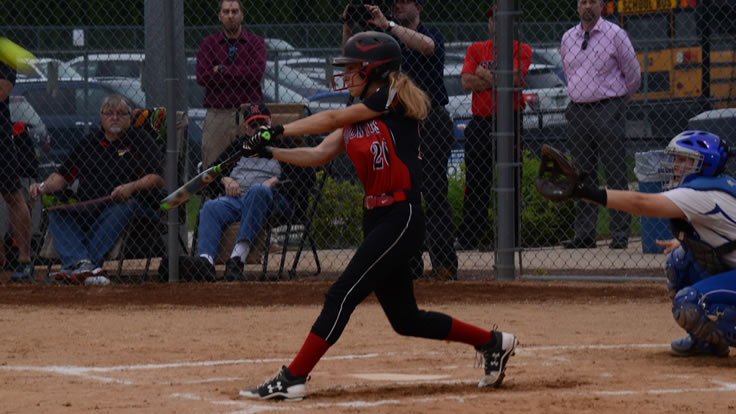 The Mounties rallied late, but came up short as their season came to an end on Monday, June 5. North Penn-Liberty softball fell to District II Champion, Mid-Valley, in the first round of the PIAA Class AAA State Playoffs at Wilkes University by a score of 2-1.

Mid-Valley struck first early. In the first inning, their leadoff batter reached on an infield bunt, then scored on a sacrifice fly later in the inning. After Carmen Bates reached base in the first, North Penn-Liberty struggled to put runners on throughout the game as Mid-Valley’s pitching and defense held the Mounties to a baserunner in just the fifth and sixth innings.

The Spartanettes padded on to their lead in the fifth inning after their second baseman singled, stole second, then scored on a single to put them ahead, 2-0. The Mounties threatened in the sixth after Mariah Kshir and Savannah Doney reached on singles to put runners on first and second, but could not get any runs across.

Finally, in the seventh and hanging on to their final out, North Penn-Liberty started a 2-out rally after Lauren Smith singled and advanced to second on an overthrow back to the pitcher. Next batter Jillian Berguson singled down the third baseline to score Smith and cut Mid-Valley’s lead to 1. However, the rally was not enough. With a runner on first, Kshir grounded out to third base to end the game, 2-1.

North Penn-Liberty played one of the hottest teams in Pennsylvania tough. Mid-Valley defeated two-time defending state champion, Holy Redeemer, in the District II Final, and have improved their record to 23-1. They will move on to the State Quarterfinals to face off against Brandywine Heights on Thursday.

North Penn-Liberty became the winningest Liberty softball team in school history, finishing the season with an overall record of 17-6, a conference record of 11-4, and a second-place finish in the District IV playoffs. Savannah Doney was the Mountie’s main pitcher this season, finishing with a 17-5 record and an ERA of 1.46. The Sophomore also led the team in a few batting categories with a .554 average, 41 hits, 28 RBI’s, and 2 home runs. Carmen Bates finished the season with a batting average of .385, and Brooke Harvey was second on the team in RBI’s with 20.

North Penn-Liberty has a lot of promise for the upcoming seasons with a young roster that is only graduating three players (Jillian Berguson, Emily Strange, and Lauren Smith). Berguson finished the season with a .208 batting average and 6 RBI’s, Strange hit .200 with 8 RBI’s, and Smith ended her senior season with a .304 average and 9 RBI’s.