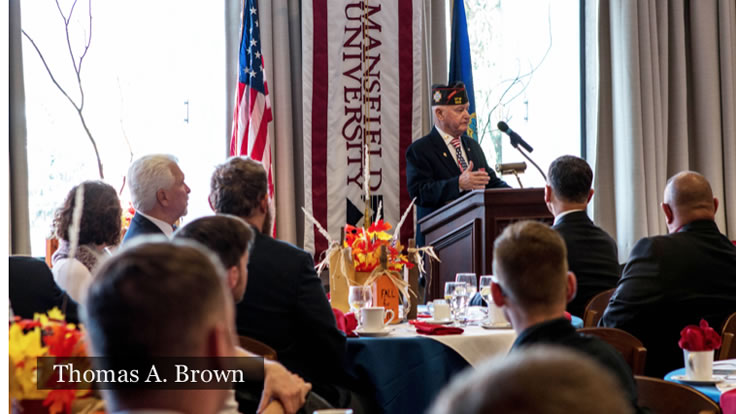 MU Gives Honor and Thanks

On Thursday, November 10, Mansfield University held a Veterans Appreciation Luncheon at North Manser Hall. This event honored students, faculty, and staff who have served or are currently serving in our U.S. military.

Mansfield President and former US Air Force Brigadier General, Francis Hendricks, opened the Luncheon by thanking veterans. After the opening, the ROTC Color Guard presented the colors, Rachel Lehman, a music technology major sang the national anthem, and Thadius Sales, a current M.U. student, pastor, and Army veteran gave his speech on the Missing Man Table Salute and the invocation.

Pennsylvania Department of Veterans of Foreign Wars State Commander, Thomas A. Brown served as the guest speaker. During his speech, he honored the 22 million living veterans that serve our country and spoke of the sacrifices they make each day.

Thank you to everyone who came out and honored our veterans.