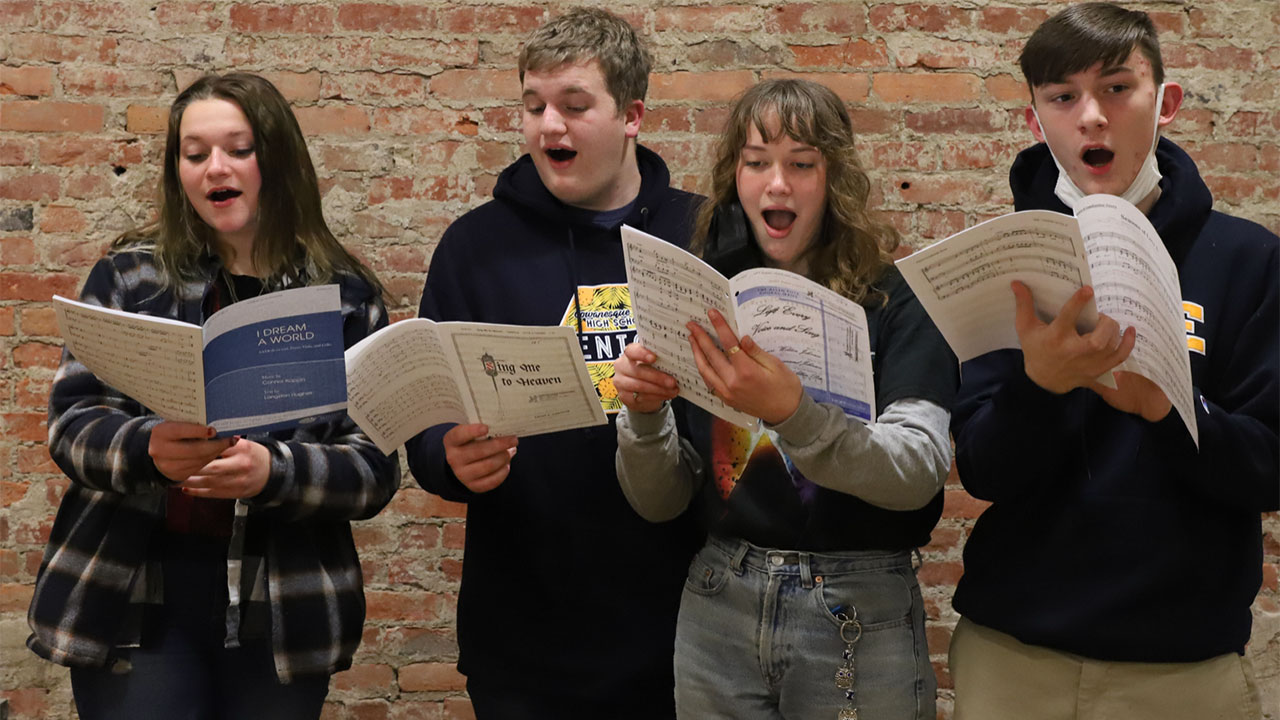 Photo by John Eaton
Among the members of the Hamilton-Gibson Youth Choir who will be singing are: (shown from left to right) Hannah Butkiewicz and Joel Tubbs, both of Westfield, Rachel James of Millerton and Justin Gordon of Wellsboro.

The choral celebration of the life and mission of Martin Luther King, Jr. is being held on Sunday, Feb. 27 at 7 p.m. in the auditorium at the Wellsboro Area School District Administration Building at 227 Nichols Street in Wellsboro.

Admission is free. Donations are accepted at the door. Proceeds will be contributed to the Tioga Homeless Initiative. Nickerson Construction is the sponsor.

Singing will be six local choral groups, including the Hamilton-Gibson Youth Choir, the Rock L. Butler Middle School 7th and 8th Grade Chorus, the Wellsboro First Presbyterian Church Choir and Treble Choir, the Wellsboro Men’s Chorus and Pine Pitch, a local a cappella group. Teachers from First Position Dance Studio will perform and there will be other visual arts as well.

The choirs will join the audience in singing three songs, including “Let There Be Peace on Earth”, “Lift Every Voice and Sing” and “Somewhere Over The Rainbow.” Each group will also sing one or two songs they have selected.

Pine Pitch will sing “Stand By Me.” “We are looking forward to using our voices to sing again,” said Karin Knaus, a member of the group and the organizer of this year’s Dr. King choral celebration. “Pine Pitch hasn’t sung together since March of 2020. This concert is always a wonderful time of bringing community members together.”

“We are excited to be able to gather for a celebration of the vision and legacy of Martin Luther King Jr.,” said Thomas Putnam who originated this annual concert. “We were not able to gather in 2020 due to a snow storm nor in 2021 due to COVID-19 restrictions. “This year’s choral celebration could not be held on Martin Luther King, Jr. Day on Monday, Jan. 17 as originally planned due to both a snowstorm and a high number of COVID cases. We’re glad we can have it on the last Sunday of Black History Month, which is celebrated each year from Feb. 1 to March 1,” he said.

The Hamilton-Gibson Youth Choir, directed by Putnam, will sing the rousing spiritual “My Soul’s Been Anchored in the Lord” as well as “I Dream a World” with text by Langston Hughes and music by Connor Koppin. The piece features cello, viola and piano accompaniment. Accompanying the choir at the piano is Gary Citro.

The Wellsboro Men’s Chorus, directed by Christina Simonis with Pat Davis at the piano, will sing “Goin’ Home.”

The Rock L. Butler Middle School 7th and 8th Grade Chorus directed by Morgan Shaffer with piano accompaniment by Marian Miller will sing an arrangement of “Dona Nobis Pacem by Mary Lynn Lightfoot and “I’ll Be There” by the Jackson Five.

Dr. King was an American Baptist minister, a nonviolent activist and the most visible spokesperson and leader in the Civil Rights Movement from 1955 until his assassination in Memphis, Tennessee on April 4,1968. He led the fight against segregation to gain equal rights under United States law for African Americans.

Both houses of Congress passed the bill to establish Martin Luther King, Jr. Day in 1983 and President Reagan signed it into law on Nov. 20 of that year. This federal holiday has been observed to mark King’s birthday, his life and achievements on the third Monday of January each year since 1986.