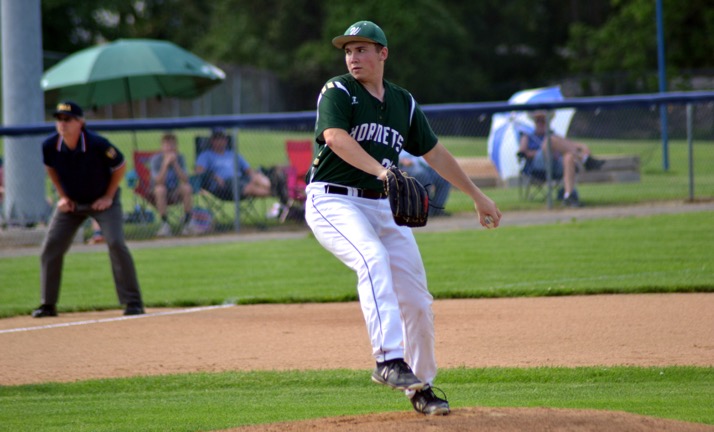 The Wellsboro Varsity Baseball team suffered a 7-0 loss to South Williamsport in a rematch of last year’s District IV Class AA finals on Tuesday, May 29.

Both teams were held hitless the first two innings then South Williamsport’s bats came alive in the top of the third. Logan Burkett led off the inning with a walk then Cole Brewer, pinch running for Burkett, scored off a Wellsboro error during Hunter Corbin’s at bat. Corbin later scored on a triple by Ben Johnson to give South Williamsport a 2-0 lead.

After the top of the third South dominated the rest of the game, both offensively and defensively.

On the offensive side the Mounties added 5 more runs over the next three innings. Defensively, Mountie pitcher Tripp Breen threw a three-hitter in 6 2/3 innings of work before reaching the max number of pitches with one out left in the bottom of the seventh.

South made it 3-0 in the top of the fourth as Peter Sinibaldi reached on an error and later scored on a Dominic Harding single between third and short. Later in the top of the fifth Hunter Finn led off with a triple to center field and scored an at bat later on a sacrifice fly to left field by Corbin to make it 4-0.

The Mounties saved their best inning for the top of the sixth with three runs to put the game away. The Mounties quickly loaded the bases after a lead-off walk, Burkett double, and Ashton Martin getting hit by a pitch. Finn drew a walk to score Nate Person (running for Harding), Burkett scored on a Corbin sacrifice fly, and a Johnson single up the middle scored Martin to make it 7-0.

The Hornets’ 3 hits came by sophomores Silas Wagaman and Billy Lechler. Wagaman went 2-for-3 with two singles and Lechler had a single in the fourth.

Sophomore Carson Davis started and recorded the loss for Wellsboro, pitching 4 2/3 innings while allowing 4 runs on 4 hits with 2 walks and 4 strikeouts. Senior Johnny Rowland and freshman Zack Rowland combined to throw the rest of the game, with the older Rowland brother allowing 3 runs on 1 hit and 3 walks, and the younger Rowland with 2 strikeouts.

“South was better in all facets of the game tonight – offense, defense and pitching,” head coach Philip Prough said after the game. “We faced a tough pitcher who was on his game. All you can do is tip your hat to his performance. The only thing to take away is knowing that you played the other teams in the playoffs, either during the regular or postseason, and none of those teams would have beat their pitcher tonight either. We only gave up 6 hits, but when you mix in 5 walks, a hit batter, and 3 errors, you’re doomed. With all that being said, we enter the state tourney for the 2nd consecutive year. Thats an accomplishment and a direct result of how hard ours kids have worked. Next week is a new week.”

The loss drops the Hornets’ record to 15-6. The team will be back in action in the first round of the PIAA Class AA playoffs on Monday, June 4, against District 11 champion Schuylkill Haven at a time and location to be determined.