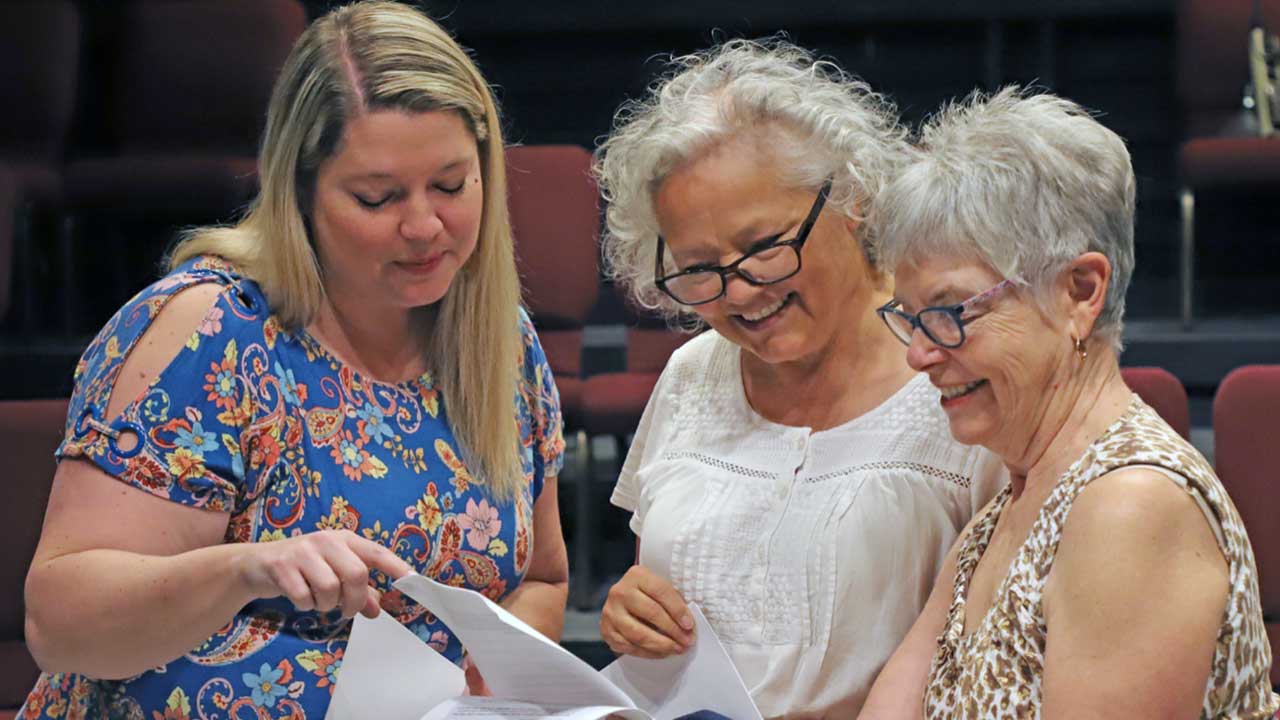 FOUR ATTEND SATURDAY, JUNE 26 HGWP DIRECTORS WORKSHOP; WOMEN INTERESTED IN DIRECTING A MONOLOGUE ASKED TO SIGN UP ON OR BEFORE JULY 31

Photo by John Eaton
Looking at information about the 13 monologues during the directors workshop are: (from left) Kacy Hagan, Yolie Canales and Janet Gyekis.

PRESS RELEASE:
Four local women participated in the free directors workshop offered by Jessie Thompson on June 26 in the Warehouse Theatre at 3 Central Avenue in Wellsboro.

They included Arline Buchman, Yolie Canales, and two of the 13 monologue authors, Kacy Hagan and Janet Gyekis. Three are experienced directors and one is new to directing.

Thompson is the producer of “Woodpecker Lips,” the 2021 Hamilton-Gibson Women’s Project production of monologues written by 13 local woman about a living or historical Pennsylvania woman.

“The four that attended the workshop, including the two writers, will be directing,” Thompson said. “I am looking for nine more women interested in directing a monologue. Those who are willing to direct are invited to email me at WoodpeckerLips2021@gmail.com no later than Saturday, July 31.”

The goal of the women’s project is to provide opportunities for women to write, direct and act to tell local stories meaningful to community theater audiences. The title of this year’s production is inspired by the phrase “She’s tougher than Woodpecker Lips.”

“The monologues range from five to eleven minutes apiece,” said Thompson. “Some of them are dramatic with intense moments. Others are bolder and funnier or quiet and reflective,” she said.

“The monologue authors can direct or act in another writer’s piece, but not their own,” said Thompson. “Authors and directors can also audition to present a monologue and we hope they do. It’s a great way for us to collaborate in different ways and for people to try new things,” she added.

Assisting during the workshop were Barbara Biddison who represented an actor during Thompson’s presentation on directing techniques, and Lilace Guignard, mentor for those writing the monologues. The authors will be submitting their completed monologue scripts to Guignard on or before Aug. 1.

The names of the directors and the monologues they will direct will be announced in August prior to the audition dates.

The directors will select their actors during the open in-person auditions being held at 10 a.m. on Saturday, Aug. 28, 6:30 p.m. on Monday, Aug. 30 and 6:30 p.m. on Wednesday, Sept. 1 in the Warehouse Theatre at 3 Central Avenue in Wellsboro. Roles are open to females, adults and young women ages 13 and up. Material to read will be provided for the auditions.

For more information about the Woodpecker Lips production or to get involved, call the Hamilton-Gibson office at 570-724-2079 or email Thompson at WoodpeckerLips2021@gmail.com.