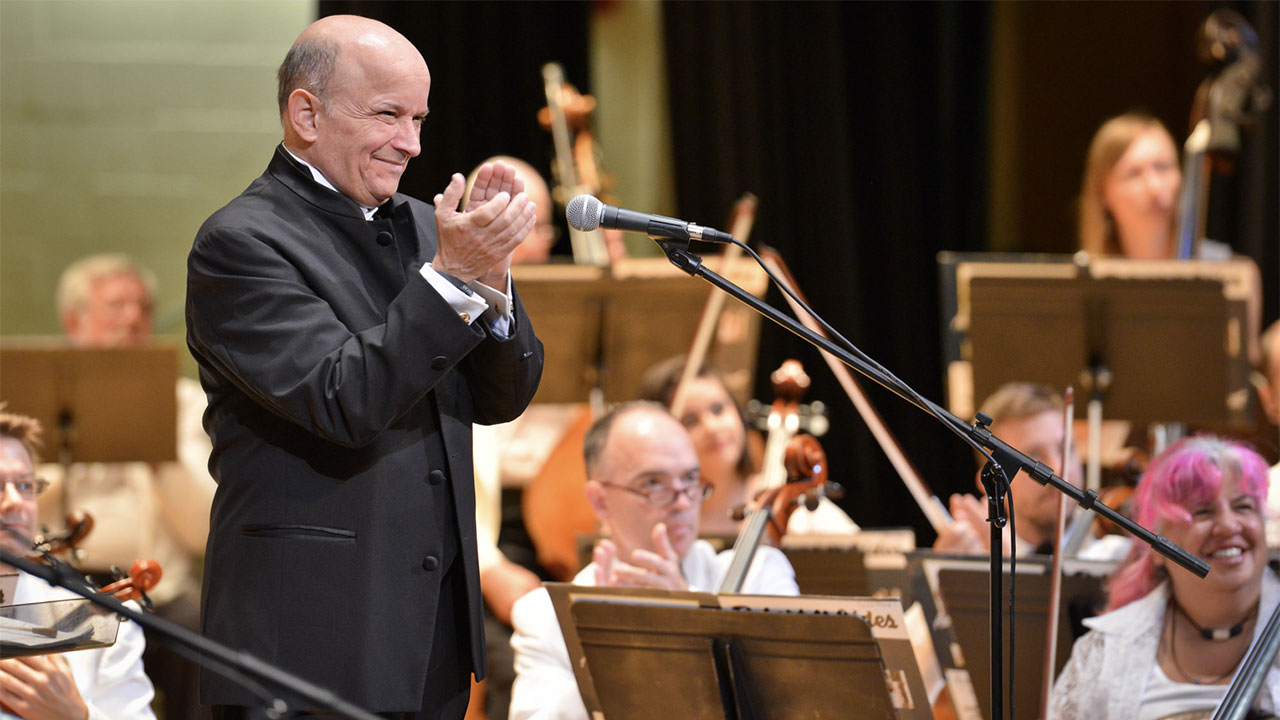 This summer, Maestro Stephen Gunzenhauser will conduct all six of the Friday and Saturday Endless Mountain Music Festival Symphony Orchestra concerts in Steadman Theatre on the Mansfield University campus in Mansfield, Pa.

“This is a rare opportunity for people to be able to attend all six symphony orchestra concerts in one location,” said Cindy Long, executive director. “Usually, the three Friday night orchestra concerts are in Steadman and the three Saturday night concerts are in the Corning Museum of Glass Auditorium in Corning, N.Y. This year, no concerts can be held in the CMoG auditorium until Oct. 1 because of New York State’s current COVID-19 restrictions.,” Long said.

“The festival offers a flex pass so an individual could use it to attend the six symphony orchestra concerts in Mansfield and save $84 off the ticket price,” Long said.

The six symphony orchestra concerts and festival will open at 7 p.m. on Friday, July 16 with Movie Night and a special tribute to Hollywood. On Saturday, July 17 at 8 p.m., each of the eight emerging Hollywood composers will perform a world premiere of his or her work with the orchestra.

The following Friday, July 23 at 7 p.m. will be the Four Seasons of Tango and a choral tribute to Oscar Hammerstein conducted by Peggy Dettwiler. At 7 p.m. Saturday, July 24, the orchestra will perform works by Navarro, Paganini and Taneyev.

The last weekend of the festival will include performances of Lalo’s acclaimed overture from his three-act opera based on the ancient legend of the City of Ys and Arturo Marquez’s ode to the stars topped off by Rachmaninoff’s Piano Concerto No. 3 at 7 p.m. on Friday,July 30 and Dvořák’s Symphony No. 5 in F Major, Rossini’s Italian Girl in Algiers Overture, Oscar Navarro’s Rose in Flames and Wieniawski’s Violin Concerto No. 2 in D Minor at 7 p.m. on Saturday, July 31.

The seventh symphony orchestra concert will be at 2:30 p.m. on Sunday, Aug. 1 at the Wellsboro Johnston Airport. It’s free. Featured will be pops music from Broadway musicals and films. The concert will end with the 1812 Overture.

For more information about the 17 concerts being held from July 16 through Aug. 1 as well as to purchase a season pass, flex pass or individual tickets, visit www.endlessmountain.net or call the Endless Mountain Music Festival Box Office at (570) 787-7800. All 2020 pre-purchased season passes will be honored this summer.