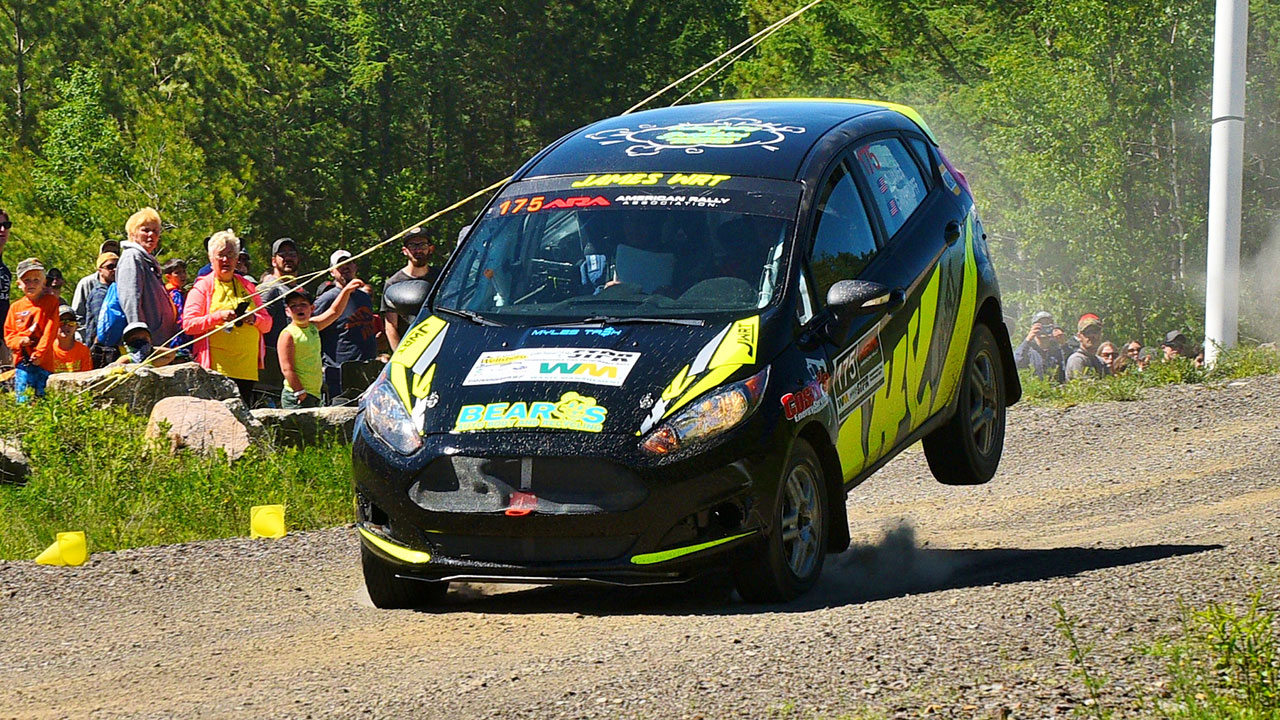 Photo by Tim McBride
Derek James lands his 2011 Ford Fiesta after the jump on Waste Management property during STPR® 2017. He is running in this year’s rally and will be taking on the jump again.

This Friday and Saturday, Sept. 16 and 17 is the 45th Annual Waste Management Susquehannock Trail Performance Rally® with two days of competitive rallying on forestry roads in Tioga and Potter counties and two Friday stages on Waste Management, Inc. property, near Wellsboro.

As of Wednesday, Sept. 14, 55 teams have entered STPR® 2022 with 30 to compete in the ARA regional rally and 25 in the national rally. The course is the same for both. The number of entrants can change right up until the rally begins this Friday, Sept. 16.

Coming into STPR® 2022, Subaru Motorsports USA’s Brandon Semenuk is in the lead with 116 national drivers’ championship points after round seven of the ARA series. Close behind is Ken Block of Hoonigan Racing Division with 112 points. Also in the championship hunt is Subaru’s Travis Pastrana with 95 points.

Among the locals who are competing at STPR® 2022 are brothers Matt and Derek James who grew up in Westfield. Matt is co-driving for Lia Block who is entered in the national rally with a 2014 Ford Fiesta. In the regional rally Derek is driving a 2013 Ford Fiesta R2 with Keegan Helwig as his co-driver and local Phil Barnes is co-driving for Greg Healey in a 2002 Subaru Impreza Outback Sport.

Husband and wife Kent and Brianna Thompson of Wellsboro bought their ready-to-go rally car, a 1994 Subaru Impreza in April of 2018 and entered the regional Open 2WD class at STPR® for the first time that year. They finished. That’s their goal this year.

The Tioga County Fairgrounds in Whitneyville, near Wellsboro is rally headquarters.

STPR® will start this Friday (Day 1) at 8:30 a.m. when the first car leaves the service area at the fairgrounds to transit to the course. In the forest at the Asaph Picnic Area spectator area, fans will see the cars come through the sharp 90-degree right-hander on the Asaph stage in the morning and again in the afternoon.

Also this Friday, event sponsor Waste Management will host two stages of the rally on its property just outside of Wellsboro in Duncan Township. The exciting jump stage where cars can travel up to 125 feet in the air will be run twice Friday afternoon. Fans can view rally action close-up from the Jump and Pit Mound spectator areas at the Waste Management Complex. Portable bathrooms will be available. Admission is $5 per person at the gate. Children under 8 and active military personnel with identification will be admitted free. Parking at Waste Management is free.

Saturday (Day 2) will begin with the Parc Expose around The Green in downtown Wellsboro. At 9 a.m., the rally cars will be parked on streets that border The Green to give fans the opportunity to see the cars up close, chat with the drivers and co-drivers, take photos and get autographs.

During the Parc Expose, the competing rally cars will line up for the ceremonial start on Main Street in front of the Tioga County Courthouse. At 10:31 a.m., the first car will leave Main Street followed in one-minute intervals by the others.

They will transit to the Joerg stage, home to the popular 12 Mile Spectator Area. Cars will start this stage around 11:30 a.m. and again at 2:30 p.m.

The Cushman spectator area on the Randall stage in the forest gives fans two opportunities to see the cars slide through this fast switchback. The first begins around noon and the second around 3 p.m.

The Wilson Point spectator area on the Wilson stage is another favorite. The cars come through beginning around noon and again at 3 p.m. and have to maneuver around a hay-bale chicane at a tight corner.

After the final stage, the rally will end at the fairgrounds with the traditional podium champagne spray.

STPR® event T-shirts will be available for purchase from 8:30 a.m. to 4 p.m. this Friday, Sept. 16 and from 9 a.m. to noon this Saturday, Sept. 17 at the Wellsboro Area Chamber of Commerce office at 114 Main Street in Wellsboro, across from The Green.

The chamber also has free maps and directions to the spectator areas.

STPR® rally teams have a driver and co-driver (navigator) for each car. They race in stages on closed public roads, trying to get from the beginning to the end of each stage as fast as they can. Unlike other forms of motorsports, no practice is allowed and teams only have one chance to review the course at the public speed limit before the event. In competition, the navigator barks out the route instructions while the driver proceeds through forestry and Waste Management roads sometimes at speeds exceeding 100 miles per hour.

Rally information is available on the STPR® website at www.stpr.org and at the Wellsboro Area Chamber of Commerce office at 114 Main Street. Stop in or call (570) 724-1926.